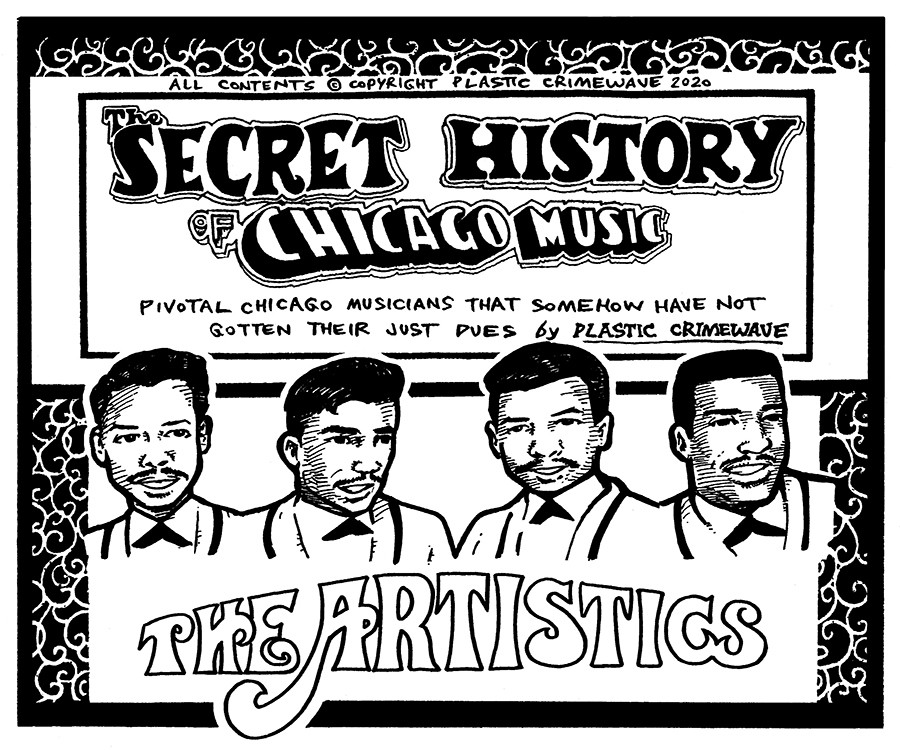 Since 2004 Plastic Crimewave (aka Steve Krakow) has used the Secret History of Chicago Music to shine a light on worthy artists with Chicago ties who’ve been forgotten, underrated, or never noticed in the first place.

Every so often I pick a subject for the Secret History of Chicago Music that can’t reasonably be described as “secret”—usually because I feel they should be better known than they are. And among the big-name groups in Windy City soul and R&B, the Artistics don’t get the love that, say, the Impressions, the Chi-Lites, or even the Five Stairsteps still do. Throw in the fact that a lazily named pre-Talking Heads project also called themselves the Artistics, and you have a real confusing “Google problem” for a first-class vocal group.

The quartet formed at Marshall Metropolitan High School on the west side of Chicago in 1958, with the initial lineup of Curt Thomas (lead), Larry Johnson (first tenor), Jesse Bolian (second tenor), and Aaron Floyd (bass-baritone). Robert Dobyne took over for Thomas in 1960, and the group had the honor of performing at the Democratic National Convention that same year. The Artistics soon began singing backup for R&B star Major Lance, including on his 1963 hit, “The Monkey Time” (which reached number two on Billboard‘s R&B chart and number eight on its pop chart).

The Artistics debuted under their own name in 1962, with the doo-wop-flavored single “Life Begins at Sixteen” b/w “One Way” on S&G Records (copies are now impossibly rare—not even one has ever sold through Discogs). In ’63 influential soul-industry maven Carl Davis signed the Artistics to Okeh (then home to Major Lance), where he was A&R manager. The A side of the group’s first single for Okeh, “I Need Your Love,” is a gritty shouter, and the B side, “What’ll I Do,” is now a beloved dance-floor filler with the northern soul set—but neither song charted.

The A side on the Artistics’ second Okeh 45, a smooth and snappy Sam Cooke-ish groover called “Get My Hands on Some Lovin’,” became a minor local hit in ’64 (and it can’t have hurt that it had been cowritten and originally recorded by Marvin Gaye). By this time Dobyne had ceded the lead spot to Charles Davis and then Marvin Smith, who lent his pipes to a pair of upbeat weepers in 1965: “Patty Cake,” coproduced by Curtis Mayfield, and “This Heart of Mine,” which enjoyed significant regional success. The latter was written by Barrett Strong, who was working closely with the Artistics at the time—his recording of “Money (That’s What I Want)” had become Motown’s first smash in 1960.

The group’s last single for Okeh, the light, horn-adorned ballad “Loveland,” came out in 1966, as did their first and only Okeh LP, Get My Hands on Some Lovin’. As its title suggests, it consisted mostly of their previous singles, and it didn’t exactly set the world on fire.

When Carl Davis cut ties with Okeh, the Artistics followed him to his new home at Brunswick Records, where they debuted late in ’66 with the snappy but melancholic single “I’m Gonna Miss You” (written by Smith, Bolian, and Johnson and produced by Davis). It hit number nine on the R&B chart and number 55 on the pop chart. In 1967 the Artistics began a five-album run with Brunswick that lasted till the end of their career.

At this pivotal moment, alas, Marvin Smith left the Artistics for a solo career (the SHoCM on Smith from 2018 tells the rest of his story). Tommy Green took over as lead singer, though Smith stayed involved in songwriting for the group. The first 45 featuring Green, the strings-heavy bopper “Girl I Need You,” was a minor hit in 1967, prompting their next proper LP release, I’m Gonna Miss You, that same year. The Artistics’ 1968 singles, including the funky “Hard to Carry On” and the sad but groovy “You Left Me,” are beloved today by northern soul fans but didn’t blow up when they were released.

The Articulate Artistics also came out in ’68, followed the next year by What Happened—on which Davis was joined as producer by Eugene Record of labelmates the Chi-Lites. Both LPs are now regarded as Chi-Town soul classics, but for some reason the Artistics couldn’t score hits like the Chi-Lites did. By 1971 Green had stepped down, and in the group’s final years Fred Pettis and then Morris Williams served as lead singer (if you know of another band that had seven lead singers in little more than a decade, hit me up). Pettis belted the Artistics’ last chart outing, the supremely catchy “Make My Life Over (I Want You To),” produced in 1971 by funk god Willie Henderson (covered by SHoCM in 2011).

The Artistics’ strong 1973 single “She’s Heaven” b/w “Look Out I’m Gonna Get You” sounded as perfectly engineered for commercial success as anything they’d ever recorded, with immaculate harmonies, sassy horns, silky strings, and lush, detailed production by Davis (with direction by Henderson). By then, though, trends in soul favored a funkier sound and lyrics that engaged with social and political realities—the 45 didn’t even chart. The Artistics also dropped the LP Look Out that year, and those would be their last releases. The group left Brunswick and soon broke up.

Interest in the Artistics didn’t end when they did, though. Reissues of their music have included a 1998 CD release of I’m Gonna Miss You and The Articulate Artistics, followed by a best-of compilation in ’99. That year Marvin Smith also briefly re-formed a version of the group, intending to cut some tracks for UK label Motorcity Records (which specialized in former Motown artists). In 2015, UK label Outta Sight reissued mid-60s singles “This Heart of Mine” and “So Much Love in My Heart” as the A and B sides of a new 45—the format where the Artistics had excelled—but sadly, that same year first tenor Larry Johnson passed away.  v

The radio version of the Secret History of Chicago Music airs on Outside the Loop on WGN Radio 720 AM, Saturdays at 6 AM with host Mike Stephen. Past shows are archived here.

We speak Chicago to Chicagoans, but we couldn’t do it without your help. Every dollar you give helps us continue to explore and report on the diverse happenings of our city. Our reporters scour Chicago in search of what’s new, what’s now, and what’s next. Stay connected to our city’s pulse by joining the Reader Revolution.

Not ready to commit? Send us what you can!