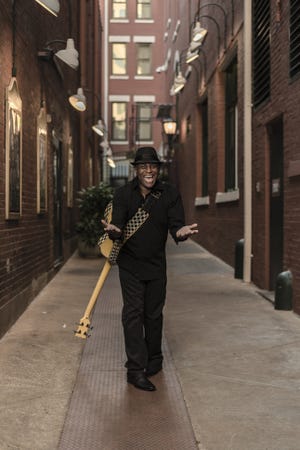 Restaurant and blues venue Englewoods on Dearborn continues to host live music, with this week’s lineup scheduled to include Biscuit Miller. The bassist-singer spent years playing in the bands of blues musicians including Lonnie Brooks and Anthony Gomes before striking out on his own, releasing albums such as last year’s “Chicken Grease” and 2010’s “Blues with a Smile,” a suitable title for the charismatic performer. Miller has also won Blues Music Awards in the Instrumentalist — Bass category in 2012 and 2017. 7 p.m. today; Englewoods on Dearborn, 362 W. Dearborn St., Englewood; $5; 941-475-7501; englewoodsondearborn.com

Van Wezel Performing Arts Hall continues its Cabaret by the Bay series, held in the venue’s grand foyer, with two shows by vocal and guitar jazz pair Ariella. The duo comprises Ariella McManus and Nicolaas Kraster, who are also members of the popular Sarasota area group Ari and the Alibis. Tickets are sold by spaced-out two and four-top tables, with both shows currently sold out, according to Van Wezel. 7:30 p.m. Friday and Saturday; Van Wezel Performing Arts Hall, 777 N. Tamiami Trail, Sarasota; sold out; 941-263-6799; vanwezel.org

Along with playing in-person performances again, Bradenton guitarist Steven Paradis continues his online show “Live from Paradis’ Porch.” Paradis performs a wide-ranging selection of covers, including The Beatles’ “For No One,” Pink Floyd’s “Comfortably Numb,” J.J. Cale’s “Magnolia” and Radiohead’s “Creep” during one of his past shows. He even recently held a livestream concert performing the Yusuf/Cat Stevens album “Tea for the Tillerman,” which turns 50 this year, in full. Noon Sunday; facebook.com/steven.paradis, PayPal: steven_paradis520@yahoo.com, Zelle: 941-462-0150

‘Music That Moves You’

Several musicians plan to take part in “Music That Moves You,” a virtual concert that supports Mayors’ Feed the Hungry, which collects and distributes food to the hungry in Sarasota and Manatee counties. The performers scheduled to take part include Kettle of Fish, Ship of Fools, Mike Sales, The Wandering Hours, Shaun Hopper, Colleen Orender, Justin Layman, Melanie Massell, Joe Bruno, MB Banned and Banjoe Steve Eirinn Abu, Steve Arvey and Leah Suarez. Donations can be made by texting GIVE to 941-275-2032. 8 p.m. Tuesday; mtmy2020.com

Singer-songwriter, Billy Joel band member and Bradenton resident Mike DelGuidice has been hosting Live on the Porch livestream concerts on his Facebook page, which he now says he’ll hold every Wednesday night. The shows draw around 50,000 views per episode, DelGuidice says, with Joel even hosting one on his own Facebook page. Along with touring with Joel as a guitarist/vocalist and fronting the Long Island-based Piano Man tribute band Big Shot, DelGuidice is a solo musician whose work includes “Ordinary Guy,” the theme song for the Kevin James CBS sitcom “Kevin Can Wait.” Show dates may vary based on touring schedule; check Facebook page in advance. 8:30 p.m. Wednesday; facebook.com/mikedelguidiceofficial

Have Gun, Will Travel

Bradenton Americana act Have Gun, Will Travel has been hosting a weekly livestream show Wednesday nights on its Facebook page, featuring singer-songwriter and guitarist Matt Burke performing solo. The group is one of Sarasota-Manatee’s most acclaimed acts, earning write-ups from NPR and No Depression and appearing on the TV shows “The Good Wife” and “The Ranch.” There should be an extensive catalog to choose songs from as well, with Have Gun, Will Travel steadily releasing albums from the 2000s to last year’s “Strange Chemistry,” their latest record. 8 p.m. Wednesday; facebook.com/hgwtmusic; PayPal: hgwtmusic@outlook.com, Venmo: @Matty-B-5000

If you are an area musician who’d like to be considered for this list, please email ticket@heraldtribune.com with your event information at least a week in advance. Show schedules are subject to change.