The annual Doc’n Roll film festival will take place from 4 – 15 November 2020. This year it will be online and across six London cinemas including the Barbican and Southbank Centre Cinemas. The festival line-up features a vast array of premiere screenings. Rosa Sawer picks five films of particular interest for jazz enthusiasts:

Left image: Back to the Source (Photo by repmusic 2020).  Right image: The Offline Playlist (Screenshots).

This documentary is directed by jazz musician and friend of LJN, Robin Phillips as he retraces the historic journey of jazz and blues in America from Chicago to New Orleans with his swing band Pinstripe Suit. The 60-minute film follows the trip from North to South, featuring interviews with fellow musicians such as bass player David Hood and New Orleans jazz musician James Martin. The footage from the road and clips of live performances in long-established jazz clubs means this is a true road-trip style documentary, highlighting key monuments in the history of jazz and blues along the way. About the trip, Phillips says “what really resonated for me was it’s great to see that the history is still vitally important to these cities… there’s just music everywhere – what I loved was that everyone was so committed to the music.”

The documentary ends with a studio session between Phillips and Dexter Allen and his soul and blues band performing In the Wee Small Hours of the Morning, integrating musicians from both sides of the Atlantic in rhythmical unison. Phillips describes this recording session as “an unexpected end, but it felt really truthful and I’m really glad it all happened.” A musical collaboration which came as a result of Phillips hearing them play in F. Jones Corner, Jackson, Mississippi. Allen perfectly sums up the spontaneity of live music: “The more genuine you are, the more it’s you, the more it connects to the people.” Music and connection is what this documentary, and what Doc’n Roll music festival is all about.

LINK: Trailer for Back to the Source

With an eclectic mix of musicians, from legendary jazz singer Irma Thomas to fiddle-player Amanda Shaw, it seems almost impossible that the concert would be coherent. But it indeed works. The slick shots and smooth production make this a very high-quality film, that transports the viewer to the characterful venue in New Orleans. Pianist and composer, Jon Baptiste (who is also responsible for the music in Pixar’s film Soul) describes music as a “unifying force by nature” and this is certainly the case for these ten musicians and their audience of listeners, united only by their listening to a mutual playlist.

Ben Jaffe, the creative director and bassist in the Preservation Hall Jazz Band explains “the whole idea was really intriguing to me, this idea of creating a playlist that you would want to listen to and from that playlist creating a concert, creating a moment, an experience.” This is a feel-good watch and one which celebrates the collective experience of music no matter your background or training.

Motian in Motion (Photo from Film).

Director Michael Kelly has constructed a touching tribute to a giant of the jazz world, American drummer Paul Motian who tragically died from a rare form of blood cancer in 2011. This film features interviews with many musicians that Motian played and recorded with over the years including Bill Frisell, Joe Lovano and Carla Bley. The world premiere will be followed by a Skype Q&A with Bill Frisell, Joe Lovano and Michael Kelly.

LINK: Trailer for Motian in Motion

This documentary tells the story of the Cuban jazz group AfroCuba, formed in the mid-70s in Havana. In Director Emilio Oscar Alcalde’s search for any copies of AfroCuba’s only LP ever to be released – an LP which was never allowed in Cuba – he discovers the original band members who are now dispersed across the world. The documentary showcases personal stories of the band members including Nicolás Reinoso, Tony Valdés and René Luis Toledo, intertwined with photographic reconstructions and emotional accounts of what could have been. 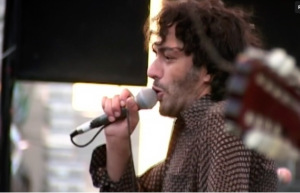 An exploration of Algerian singer and activist, Rachid Taha’s cult status in France where he reinvented the global music scene with his inventive combination of Algerian rock, techno and punk. This 52-minute film, directed by Farid Haroud reveals his passions, inspirations and his lasting legacy.

LINK: Trailer for The Sweet France of Rachid (Taha)

Buy tickets for the festival

Doc’n Roll Fest is supported by the BFI