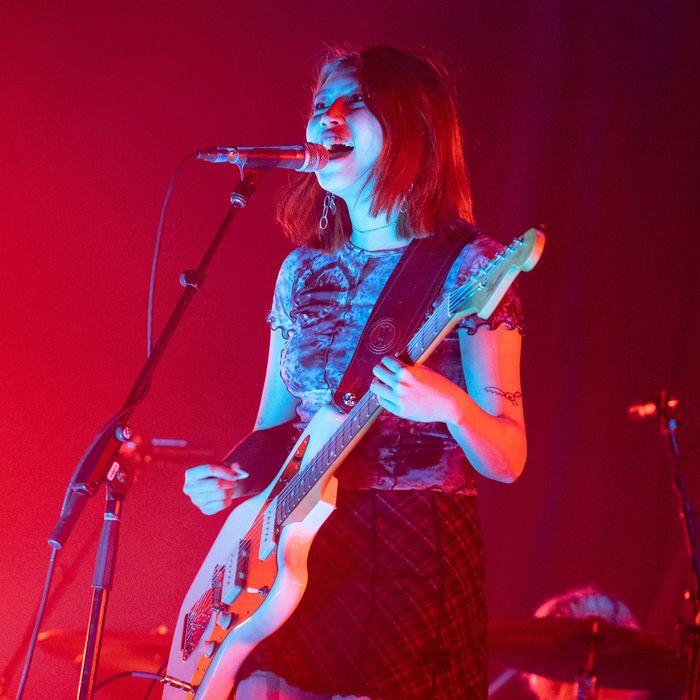 “I hope to inspire girls to play more. I always say this, but there needs to be more chicks onstage.” Photo: Lorne Thomson/Redferns

Fake It Flowers, the stunning debut album by beabadoobee, closes with a three and a half minute distillation of everything that makes beabadoobee, the rock project by 20-year-old Bea Kristi, so exciting. That finale, “Yoshimi, Forest, Magdalene,” is a blistering one-take that’s playful, emotional, and messy at once. It’s a clear reinterpretation of ’90s rock, and if you weren’t paying attention, you might mistake it for Veruca Salt or Liz Phair. The lyrics are both intimately personal (about Kristi’s relationship with her boyfriend) and youthful and lively (“I think I want to marry him / But I really don’t want to freak him out” begs to soundtrack a teen movie). “The whole story behind it is about what I want to call my children and how my boyfriend’s never going to leave me because he thinks I’m pretty,” Kristi says, “so I was really channeling that chaotic energy in the song.”

Kristi has made ’90s-influenced rock music addressing young women for years, but Fake It Flowers is her clearest statement yet. Born, like her EPs, from her childhood bedroom in London, it’s an album of “everything I was supposed to tell someone but couldn’t,” Kristi says. Tracks reference and address her mental-health journey, past relationships, and her current longtime boyfriend, Soren Harrison. It sounds bigger than her past EPs, drawing deeper from the ’90s rock music she grew up with, from Alanis Morissette to the Cranberries. “I love that feeling of nostalgic-ness where it feels like a warm blanket,” Kristi explains, calling from Harrison’s West London house. And, unsurprisingly, people have been craving the comfort: The album comes off the heels of the first song she ever wrote, “coffee,” turning into a chart-topping TikTok hit as a sample in Powfu’s “death bed.” Kristi spoke to Vulture about the album, her TikTok stardom, and making rock music for young women.

What has it been like to be back at home? I know it’s been a really inspiring place for your music.
I love my bedroom. I always say this, but I feel like no one knows you better than your own bedroom. Your bedroom has seen you go through the worst and it’s seen you at your best, and I feel like that’s why I have such a close relationship with my bedroom. It’s the place where I’m most comfortable in. And that’s where I’m most creative.

For a while, you were just releasing EPs. What made you decide, Okay, now’s the time to do the album?
I feel like I had grown so much because of tour and through those EPs, and as a girl. I wanted to write something about everything I’ve been through in my life. I started doing therapy again, and I realized how a lot of things from my childhood have affected the way I act as a young woman today. I remember going on tour as well, thinking I knew myself; I didn’t know myself at all. I wrote about why I thought that, and it’s all in Fake It Flowers.

What about touring made you realize that?
I’ve never been away from home for that long. So it was really scary. I learned how to do the washing [laughs], simple stuff like that. I’d been very babied in my life, and my parents, no matter how much money they have, always try their best to give me the best life. I feel like it was the beginning of how my life was going to be and how I had to get used to being alone and very far. I made mistakes, and I realized a lot of things, and I feel like all that stuff made me grow to the woman I am today.

It sounds like what it might be for some people to go off to university or go move out on their own.
Yeah! It’s like that equivalent, literally.

This album that has this really big, blown up rock sound. How did that fit into everything?
There are certain points in music where I want to pinpoint and pick and re-create in my music today, like a guitar sound in My Bloody Valentine. If I hear a really good guitar sound, I’m going to go copy it. You know, nothing’s really original these days. And I wanted something big. I’d just done an arena tour with the 1975, and I wanted music to fill that space. I just wanted to go crazy; I wanted to go big; I wanted to rock out.

Listening to the new album compared to your past work, I enjoyed hearing you figure out how to scream. What was it like to try that out?
I have loads of mental breakdowns in my room, so I feel like I’m very used to screaming my head off. I felt like I was born ready. So I was very excited to scream in the studio. I remember [producers] Pete [Robertson] and Joe [Rogers] being like, “Are you sure about this? It’s going to fuck up your vocals.” And I’m like, “Nope, I don’t care. I really want to scream.” And it was one of the funnest moments of recording.

This album is really something I wish I could be seeing live. How are you feeling about eventually performing this?
I feel like Fake It Flowers will only thrive at its best when it’s heard live. [But], I needed this time to really be by myself. If I went on tour for this whole year, I could’ve gone crazy, and I’m glad that I’ve had this time to reflect on everything that’s happened so far and live within this world of Fake It Flowers. But now, I’m ready to go out.

You’ve never been afraid to be lyrically direct. Where does that confidence come from?
It’s definitely not confidence. [Laughs.]﻿ I can’t help it sometimes. I don’t really have a filter, and I kind of vomit things straight from my brain out from my mouth. After it comes out, I’m like, Fuck, everyone’s going to know now. And I definitely have those conflicting thoughts about Fake It Flowers. But at the end of the day, I wrote this album for myself. It helped me a lot, mentally. And the more honest I am, the more girls I can relate to, and the more I can help myself, really.

How do you feel about your song “coffee” taking on a new light as a sample in “death bed” by Powfu, and gaining all this success on TikTok for a sound that’s different from your style?
Overwhelming at times, but also very cool. I’m not used to this much attention. I didn’t have much involvement in that, but despite its differences with the music I make, I think it’s really cool that people can relate to “death bed” and also really like the singles off Fake It Flowers. At first it was hard for me, but you know, it’s cool. People are listening to the music at the end of the day.

It seemed like a more passive process on your side.
Yeah.

Have you been in touch with Powfu at all since the song got big?
No. Basically, he had sampled my song, and I didn’t know, but it was online, and then he asked for permission, and then he put it out on streaming sites. He’s so talented; he really made that song his own. We haven’t spoken, but I feel like we have an underlying appreciation between the both of us, because that song has honestly given us both so many opportunities. And he’s a cool guy.

Did you have any favorite TikTok videos that came out of it?
[Laughs.] I feel like I missed TikTok by a couple of months and I don’t get some of the jokes. I know there’s a lot of dog TikToks with the song in the background, I like those specifically. I see them on Instagram sometimes.

If “death bed” was all that someone knew of you ahead of this album, what else would you want them to know?
I feel like no one will truly understand me, and I realized that along the way in my career. But I want people to appreciate my music. I want my music to evoke a feeling. Whether that’s good or bad, if it evokes a feeling, that means I’m doing something. And I hope to inspire girls to play more. I always say this, but there needs to be more chicks onstage.

Thinking about the way that song got popular, and then your album, I’ve seen some talk about you bridging pop and rock music. What do you make of that?
Genres are limiting sometimes.

It seems like the limit goes both ways — both with you, but then also with saying, “People won’t like rock music unless it’s a certain way.”
I guess it’s just … there are not a lot of girls on guitars at the moment. I know there are really amazing female artists right now, but there needs to be more of them, and I think people are catching onto it.

It’s a conversation that comes and goes every few years in pop and rock music, but it seems like people are now trying to figure out, with all this time off, how to make it better. Do you feel hopeful?
It’s good to be hopeful. I’m part of this amazing community of amazing female artists, and there are a lot of us. This record is literally me whining, and me being annoying, and me telling you about what I feel even if you don’t care about it. And I think that’s what 15-year-old Bea needed to hear. It’s okay to be a bitch. It’s okay to be annoying. It’s okay to be loud. It’s okay to be a sarcastic little shit. I think there’s a lot of internalized misogyny and a lot of girls bringing other girls down, when girls are supposed to be encouraging other. They’re supposed to have each other’s back. It’s important to keep that in mind, so the music industry can be filled with much more amazing, talented women.

This interview has been edited and condensed.