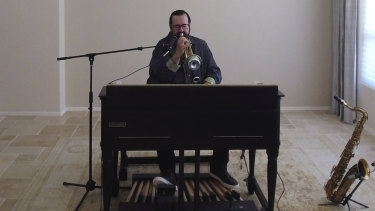 This year’s Melbourne International Jazz Festival was cancelled just days before the program was due to be launched. Organisers pledged to find ways of supporting local musicians and created a three-part online festival – These Digital Times – featuring an eclectic array of Melbourne acts and a handful of internationals.

Saturday’s instalment unfolded mostly in real time. The two overseas acts were pre-recorded, as was the morning set from pianist Nat Bartsch, who welcomed us into her living room with a series of tender and serene piano pieces from her Lullaby Project.

Italy’s Federico Casagrande offered a solo guitar set using pedals and loops to create layered compositions and intriguing textural effects. US organ maestro Joey DeFrancesco (who was going to headline this year’s MIJF) gave an entertaining iso-show from his Arizona home, where his beloved Hammond B3 conjured soulful grooves, spirited solos and vibrato-drenched chords. He also accompanied himself on trumpet and picked up a tenor sax for a gorgeously fluid rendition of Lady G.

Other acts were streamed live from a Melbourne production studio with a big stage, several cameras and high-tech sound and lighting. Guitarist Kathleen Halloran demonstrated impressive clarity of tone and versatility: from melodic lyricism to fusion-flecked grit.

Saxophonist Solomon Sisay and his band built a hypnotic modal introduction into a pulsating Ethio-jazz party. Andrea Keller’s Five Below bristled with bold drama and spiky dissonance – but, like the title track from Keller’s album Life is Brut[if]al, the darkness was flecked with beauty and light.

The Sugarfoot Ramblers captured the spirit of New Orleans in their irresistible set of early jazz classics, with a wonderfully agile frontline and buoyant rhythm section. And singer Olivia Chindamo deftly extemporised on both lyrics and melodies as her duo partner (and father), Joe, created streams of shifting harmony at the piano.

Not even the sleekest production values can compensate for the lack of a live audience. The Chindamos spoke for everyone when they bid us a wistful farewell with I’ll Be Seeing You.