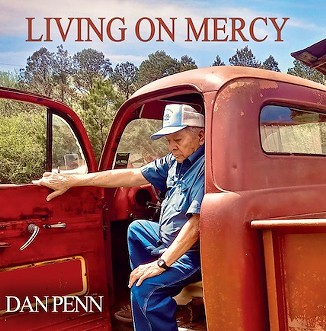 Dan Penn knows a bit about suffering and joy. Since he began writing songs and producing at Fame Studios in Florence, Alabama, in 1960, and through his long Memphis period at American Sound Studio, creating hit after hit for the Box Tops and others, he’s always had a way of cutting to the quick of an emotion. “The Dark End of the Street,” the Penn classic made famous by James Carr, is both an urban landscape and a mental geography, limned with a few deft strokes of the pen, and the beauty of such a song lies in its simplicity.

For such songs, it’s ideal for the music to be like water. Like a pristine lake over which lyrics skip like stones, you may barely register that it’s there at all.

That’s the ideal, anyway, and it’s reassuring that such an approach informs Penn’s latest, Living on Mercy (Last Music Co.). The album, which was officially released two months ago, with a vinyl version coming out this Friday, is only his fifth collection of original songs, excluding live albums and compilations; and only his third fully produced record. And that may be because he takes his sweet time writing songs. Certainly, they all have an unhurried quality, where each word has been chosen and worked over carefully.

And the music fits this mood perfectly. There are no dramatic angles or sharp attacks, only resplendent beds over which Penn can pour his heart out. The recording sessions in Muscle Shoals and Nashville included Milton Sledge (drums), Michael Rhodes (bass), Will McFarlane (guitar) and Clayton Ivey (keyboards), along with a full horn section, and these players are clearly seasoned. Not a note is out of place.

The general approach is cosmopolitan soul, with smooth, church-like tones coloring even the more up-tempo numbers. Now, over a half-century after the innovations of soul were pioneered, those musical moves are well-practiced and flawless, yet heartfelt, and totally authentic. It feels reassuring to hear these sounds played with both heart and restraint.

And that allows Penn’s stories and moods to take center stage. To these ears, it’s a bit too reassuring when Penn is happy and grateful, as with the title track, but especially moving when he hints at something more grim. One standout track, “Blue Motel,” may be one of his most moving, simply by virtue of painting his dark portraits with such plainspoken honesty.

It’s a long and winding dusty road to the outskirts of hell
Where only losers find their way to this old run down motel
It’s a long way from paradise to the dark end of the street
From champagne to mad dog wine, it’s all so bittersweet
Here at the blue motel

There are many stories, many moods here, but something in this song cuts to the quick of them all. From champagne to mad dog wine, they’re all so bittersweet.

Always independent, always free (never a paywall),
the Memphis Flyer is your source for the best in local news and information.

Now we want to expand and enhance our work.
That’s why we’re asking you to join us as a Frequent Flyer member.

You’ll get membership perks (find out more about those here) and help us continue to deliver the independent journalism you’ve come to expect.