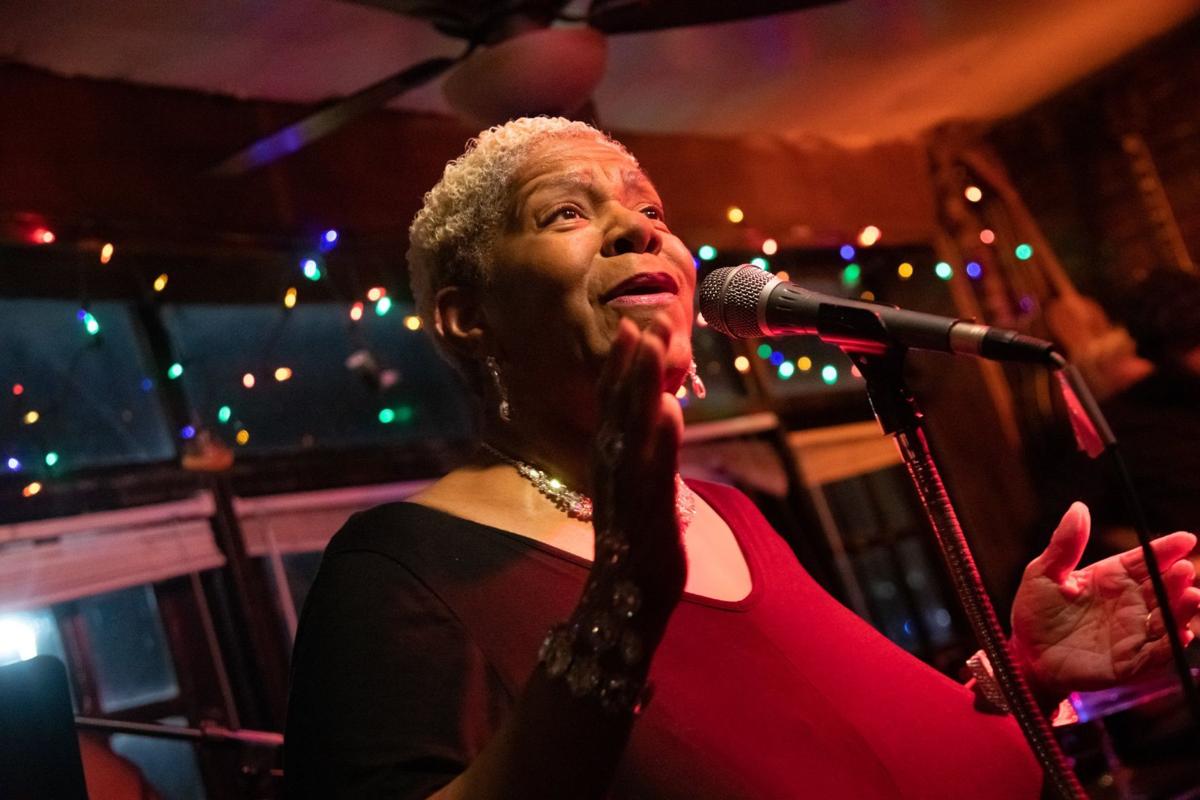 Blues and soul singer Kim Massie has died; ‘There will never be another’

Veteran singer Kim Massie, whose big vocals filled the blues clubs and other concert venues of St. Louis for decades, died Monday, Oct. 12, 2020, according to multiple sources close to her.

“I know her presence will be hugely missed on the St. Louis music scene,” jazz singer Denise Thimes said. “There will never be another Kim Massie.”

Ms. Massie lived in Fairview Heights; her age is unclear, though she is believed to have been in her early 60s.

Her cause of death wasn’t specified by family members, but in February she suffered a heart attack onstage at BB’s Jazz, Blues & Soups, and she also was battling sepsis, among other ailments.

Throughout her career, her powerful, church-honed pipes were a constant as she performed at many music festivals, benefits and tribute shows, from Twilight Tuesdays to the Big Muddy Blues Festival to LouFest, where she performed during its inaugural year in 2010.

While she found her niche in blues, she also performed soul, gospel and more.

One of her most popular gigs was a twice-weekly residency at Beale on Broadway downtown with her band the Solid Senders. Ms. Massie’s performance closed the venue in 2019; it was there where she celebrated her 10th anniversary as a performer in 2011.

Beale on Broadway’s Bud Jostes once said of Ms. Massie: “She has performed to people from all over the world that come to visit this little club. On any given Tuesday or Thursday, Kim will have had groups from four or five countries.”

Her version of “If I Can’t Sell It I’ll Keep Sittin’ on It” was a constant showstopper wherever she performed.

Ms. Massie, who was born in St. Louis, moved with family to Lorain, Ohio, near Cleveland, as a child. She returned to St. Louis in 1999 to pursue music. She started out doing karaoke before taking it more seriously, diving into the scene at BB’s Jazz, Blues & Soups and the Hard Shell Cafe.

Gus Thornton, who until last year was Ms. Massie’s longtime Solid Senders bassist, met her around that time.

“Working with Kim was among the best gigs I ever had,” Thornton said. “We had a lot of really nice gigs, a nice living doing what we were doing, and it was one of my best times as a musician.”

Thornton played with Ms. Massie for 19 years, longer than any other player in her band. He also worked with Albert King and Chuck Berry; he currently plays with Marquise Knox and Carolyn Mason.

“I’ve worked with some really good singers, and she’s tops. I can’t say anybody was better than her. She was just a natural. I don’t know that she had a whole lot of experience before I started working with her. A lot of it was just natural.”

Thimes met her early on as well, in the early 2000s. Thimes introduced Ms. Massie to the music of Etta James. Throughout her career, Ms. Massie often was compared to James.

Thimes led Ms. Massie to a classic poster Thimes had on her wall of James.

“Kim looked at me and looked at that picture and said, ‘I am Etta James.’ Girlfriend got that blond hair, and the rest is history.”

Thimes says there were occasions when people tried to pit them against each other, but they’d never fall for it.

“I let her know, ‘Girlfriend, you’re bad at what you do, and they tell me I’m bad at what I do. I’m not for that mess,” Thimes said. “The love we had for each other — I don’t care where I’m performing, I’m going to call her onstage, and she’s going to call me up onstage. We supported each other and had a healthy and mature music relationship.”

The pair performed “When Jazz Meets Blues” concerts for several years for Redevelopment Opportunities for Women.

”I think jazz is gonna tear blues up, what you got to say about that, blues?” Thimes joked in advance of a 2004 show at the Pageant, to which Ms. Massie replied, “Blues is gonna chew it up.”

”For years, I’ve been doing everybody else’s music,” she told the Post-Dispatch. “I’m doing Aretha, I’m doing Whitney, I’m doing Luther, all that stuff. (But) this is me. It’s not Kim singing Aretha. It’s Kim being Kim.”

”I’ve had a number of inquiries about (why) I’m not doing my own material,” she said. “Now I have something. It puts me on the map. I feel really good about that.”

Her son Adam Massie served as her manager for about a decade beginning in 2008, a position he fell into after seeing her previous management wasn’t working for her.

“Kim Massie came at a price, and I made sure she made her money,” Adam Massie said. “The thing about Mom that was so amazing, I would say something wasn’t a good move, but she would want to do it anyway and said God would bless her. It wasn’t a lot of work for me to do the contracts. Kim sold herself.”

He calls her his best friend.

“We were literally road dogs,” he said. “I took her everywhere. I was her right-hand man. I get the satisfaction of a lot of great memories.”

In 2016, Ms. Massie was featured on the season premiere episode of the TNT series “Good Behavior,” which her son negotiated. She performed a cover of the song “I Finally Forgot Your Name.”

Adam Massie said his mother had aspirations that involved breaking through in the music industry but found it frustrating being told she wasn’t what they were looking for.

Ms. Massie also tried her hand at live theater, appearing in the St. Louis Black Rep’s 2003 production of “Ain’t Nothing But the Blues.” That performance led her to pursue the blues more deeply.

“I’m proud to have the title Kim Massie, blues singer,” she told the Post-Dispatch. “Before, I used to cringe. Now I know I’m part of something that’s important and will be here when I’m gone. This is a scene that comes together and supports each other. It’s so authentic and feels more real in St. Louis than it does anywhere else.”

The rapper easily advances to next week’s show with his partner Daniella Karagach as they danced to DeBarge’s “Rhythm of the Night.”

Nelly landed his highest score yet dancing the paso doble to DJ Khaled’s “All I Do is Win.”

Last week’s show saw Nelly and his partner Daniella Karagach’s best score yet with a total of 21.

The concept for the Lot is similar to a drive-in concert, minus the cars.

The vinyl will be available Nov. 20.

The concert will be shown on the outdoor screen there, is exclusive to St. Louis, and will not be shown anywhere else.

El Monstero’s December residency at the Pageant will continue

The shows are El Monstero 2020: The Warm Thrill of Confusion, and begin Dec. 17.