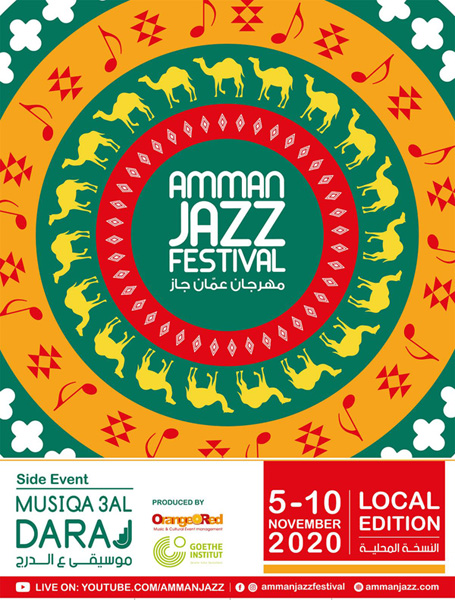 According to the organisers, the festival’s new edition will bring about “connections beyond borders, exciting new projects and productions and exhilarating new sounds sparking global musical conversation.”

AMMAN –Celebrating 9 years of jazz from around the world, this year’s Amman Jazz Festival is going local and digital from November 5-10, with a special homegrown line-up.

The upcoming special edition will attempt to dig deep into the Jordanian musical scene by presenting influential and innovative musicians to an international audience online, switching the cultural exchange around with an approach that is novel to the acclaimed festival.

Amman Jazz Festival, the only major event dedicated to jazz in Jordan, brings together local and international professionals.

Over the years, the festival has managed to attract a large audience and expand globally, while creating opportunities for sustainable cultural exchanges.

Among fans and media, the festival is recognised for celebrating diversity, cultural fusion, creativity, unity and dialogue by featuring international, regional and local jazz musicians.

According to the organisers, the festival’s new edition will bring about “connections beyond borders, exciting new projects and productions and exhilarating new sounds sparking global musical conversation.”

“What we are aspiring for is to re-think the new now, the new tomorrow, and come up with alternative solutions in these challenging times, rooted in our mission to move the industry forward by supporting the local independent music scene, through providing the opportunities needed for the musicians to flourish,” said the festival’s founder, Lama Hazboun.

Part of the festival this year will be the innovative Musiqa 3al Daraj side event, which spotlights pioneering musicians and performances on the winding MMAG Foundation staircases of old Amman.

The Musiqa 3al Daraj aims to connect the hilly city with its inhabitants and music lovers near and far with the city.

The second edition of Musiqa 3al Daraj, realised by Orange Red and the Goethe-Institut Jordan, will feature concert series that bring Jordanian indie music to the staircases of Amman, taking the connecting pathways of Amman’s seven hills to the aural imagery of curious audiences.

Due to the outbreak of the coronavirus pandemic, most festivals have been postponed or cancelled in 2020, including the Jerash Music Festival.

And though Jordan’s thriving music scene has been hit hard by the pandemic, musicians and festival organisers are still struggling to turn challenges into opportunities.