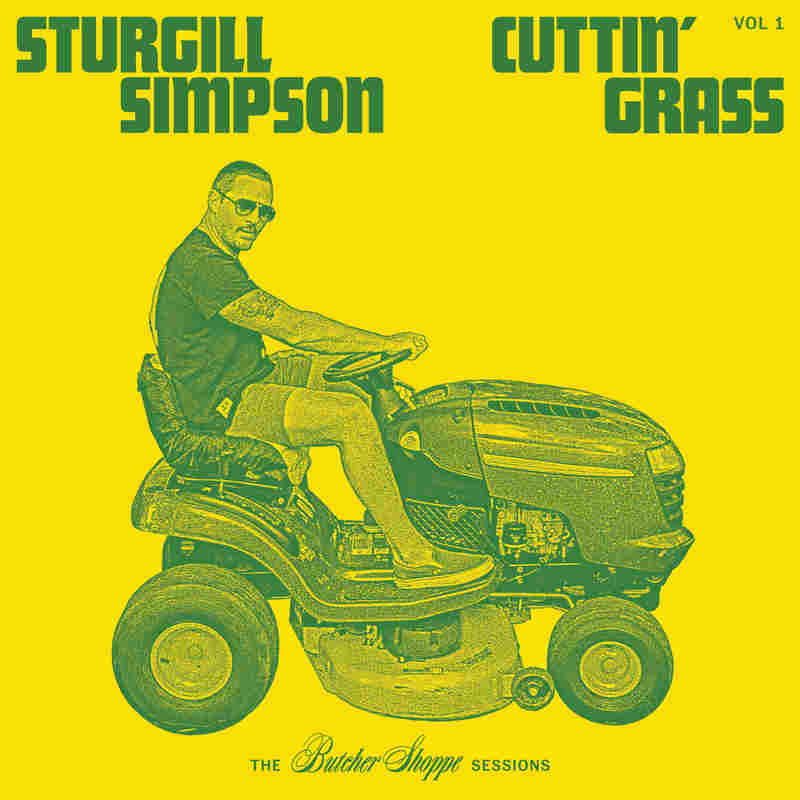 Before recording Cuttin’ Grass Vol. 1, Sturgill Simpson (seated at center with guitar) assembled an all-star crew of bluegrass players to help him reimagine songs selected from across his own acclaimed — and genre-defying — albums. Semi Song/Courtesy of the artist

Semi Song/Courtesy of the artist 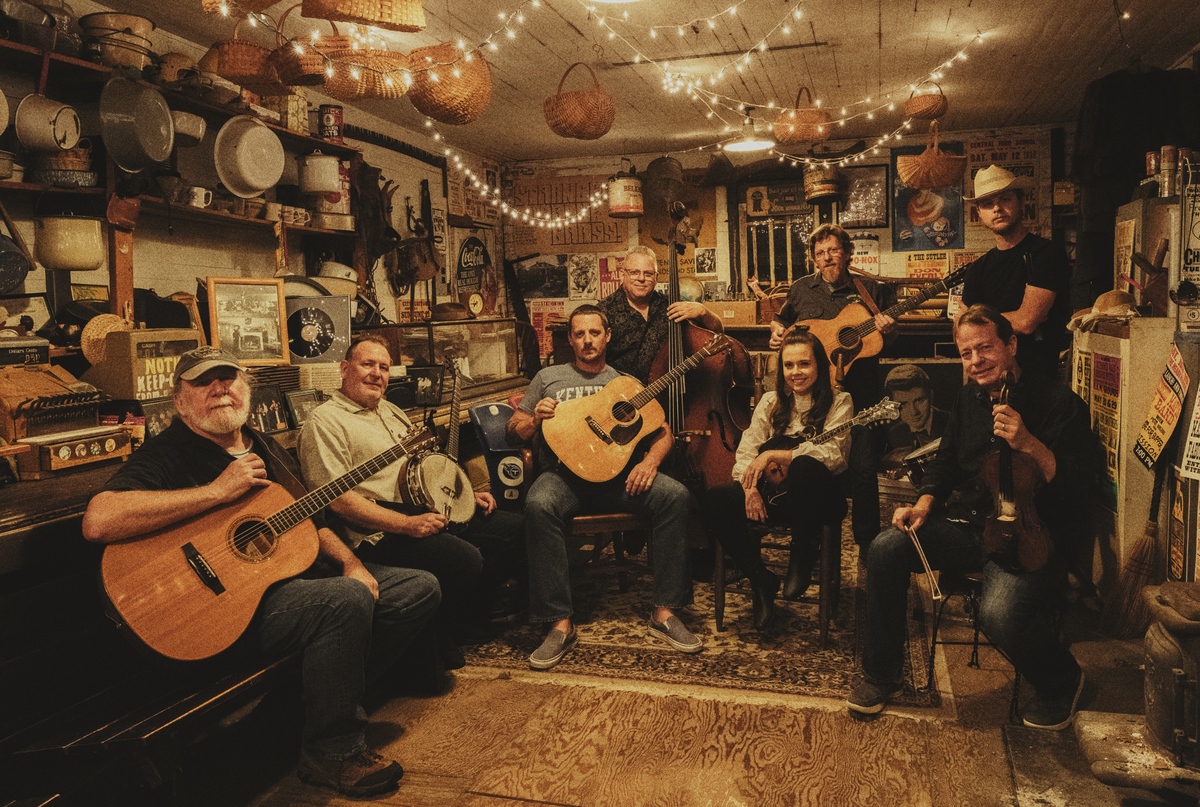 Before recording Cuttin’ Grass Vol. 1, Sturgill Simpson (seated at center with guitar) assembled an all-star crew of bluegrass players to help him reimagine songs selected from across his own acclaimed — and genre-defying — albums.

Semi Song/Courtesy of the artist

In the first, anonymous year he lived in Nashville, Sturgill Simpson would head out from his ugly apartment to the Station Inn every Sunday night. The man who’d go on to define a new lane with his 2014 breakthrough Metamodern Sounds in Country Music and win a Grammy for his follow up, A Sailor’s Guide to Earth, would sit within a circle of folding chairs – like an A.A. meeting, people might joke, but for those addicted to hot licks and tight harmonies – and play bluegrass. A Kentucky kid, Simpson had avoided the music growing up despite his grandfather’s proselytizing, preferring electric guitar buzz. But as he struggled in a city where music-industry conformity often seemed to taint the water, he found that bluegrass — a music that’s both rule-bound and wild, peaceful and room-wrecking — was as paradoxical and endlessly interesting as he hoped his own songs could be.

Fifteen years later, Simpson has followed his zigzagging muse through one of the 21st century’s most fascinating musical careers. He’s rewritten country’s rulebook, explored psychedelic rock and almost-heavy metal and gained a fervent audience doing the opposite of what Nashville’s establishment thought he should do. A look back is in order. He offers just that on the just-released Cuttin’ Grass, Vol. 1 (The Butcher Shoppe Sessions), a surprise drop on his own label, High Top Mountain Records – a return he’s making after two major-label releases. It features 20 new versions of songs cherry-picked from the country-leaning side of Simpson’s career, stretching back to his now mostly-forgotten band Sunday Valley, with selections from his first three solo albums, reimagined by an intergenerational band of bluegrass legends, its leader relaxing into the richest corners of his Kentucky baritone. Quickly recorded but with years of love behind it, it’s a chance for Simpson to reveal what bluegrass has given to him, and what he has to offer it.

His fans dared him to do make this album. Stuck at home in South Tennessee recovering from a vicious case of COVID-19, Simpson engaged in some social media fun and turned it into a fundraising opportunity for his favorite charities: the Special Forces Foundation, the Equity Alliance and MusiCares. If fans hit a certain donation goal, he announced, he’d release a new album. They exceeded it. Simpson and producer David Ferguson recognized a musical opportunity. The best players in bluegrass were grounded, unable to tour, and many lived nearby. A few phone calls later, the group was formed, and a three-day recording session was scheduled.

Simpson lovers will enjoy tracing the way this band’s work both transforms and highlights what’s great about Simpson’s songs. He’s said that the bluegrass he loves dates from the post-war period when titans like Bill Monroe were defining it in jazz-wise ways, to the mid-1970s, when its experimental edge was arguably compromised by the tyranny of super-fast, athletic flashiness. The players he and Ferguson have gathered are Olympian in prowess, but graceful and flexible in the way they use their chops to adapt these songs. The big-band vibe of Simpson’s Sailor’s Guide ballad for his first-born son, “All Around You,” becomes sweeter adhering to the patterns of a country waltz. The simmering ballad “Just Let Go,” from Metamodern Sounds, gains swing from Stuart Duncan’s fiddle and Sierra Hull’s mandolin. “Living the Dream,” a citified blues, goes rural under the guidance of banjoist Scott Vestal. The Kris Kristofferson-esque “Turtles All the Way Down,” the signature song of his psychedelia-influenced phase, is now redolent of Bill Monroe – precise, but like a jazz dance, every step offering a little twist.

Bluegrass aficionados will marvel at that band: not only Duncan, Hull and Vestal, but bassist Mike Bub and guitarists Tim O’Brien and Mark Howard. (Simpson’s regular drummer and fellow bluegrass expert Miles Miller anchors the rhythms.) These players embody the epoch Simpson favors, from Bub’s work with Del McCoury’s classic band to O’Brien’s innovations in Hot Rize to Hull’s thoroughly contemporary, songwriterly solo efforts. (It’s notable that Duncan and Bub played on The Mountain, the bluegrass album that Steve Earle, Simpson’s country-rock spiritual uncle, made in 1999, at a similar point in his career.) Simpson can just be himself in this company – he doesn’t greatly alter his trademark, resonant singing style, but it’s tempered, lighter, defter.

As usual, Simpson’s right on time with this surprise move. In 2020, bluegrass is changing, with groundbreakers like Molly Tuttle, Our Native Daughters, Dom Flemons and Jake Blount pushing its boundaries and elders like Sam Bush and Alice Gerrard finding a new generation of fans. Simpson’s protégé Tyler Childers released his own bluegrass session, Long Violent History, just a month ago. This most modern of traditional forms is again renewing itself. Grabbing a chair within its circle again, Simpson shows how he’s been part of that process for years.