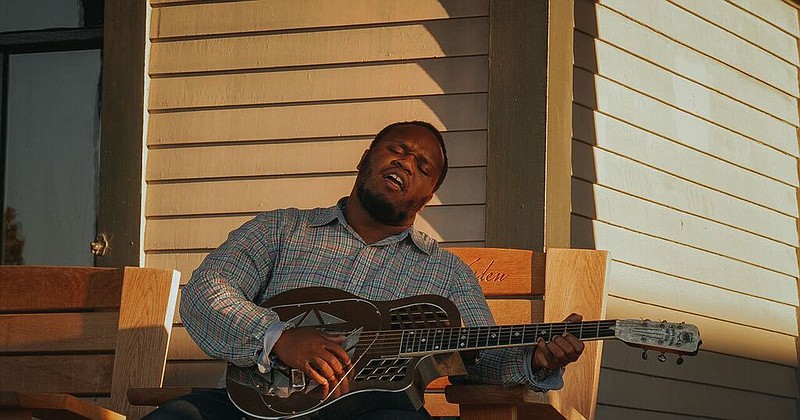 At just 24 years old, multi-instrumentalist and Grammy nominee Jontavious Willis is shaking up the blues world with his technical mastery and tying the genre’s deep cultural roots to the present. He returns to the Walton Arts Center for his first headlining show in Fayetteville Oct. 22. (Courtesy Photo)

“Ah, you already know,” Jontavious Willis says knowingly. “What it’s always been doing — healing us since the beginning of time.”

The question was what role the young bluesman thinks music will play in helping people get through such a tumultuous year.

Willis originally occupied a space on the 2020-21 West Street Live series lineup, but now he returns to the Walton Arts Center in Fayetteville Oct. 22 during this period of intermission programming. Though the concert has been moved to the larger Baum Walker Hall to accommodate social distancing practices, shows on the West Street Live series have come to be known for their intimate, listening-room feel and engaging relationship between performer and audience. That’s right up Willis’ alley, he affirms warmly.

“I know the theater was great. The show was great, too, and I gained a lot of fans there,” he recalls of his first visit to Arkansas — a 2017 performance at the WAC opening for blues legends Keb´ Mo and Taj Mahal. “So when I went to the [King Biscuit] Blues Festival in Helena, Ark., a lot of folks from Fayetteville came to see me. I’m glad to be coming back.”

As it has for many others in the music industry, 2020 has both given Willis a chance to slow down and has also presented new artistic opportunities. But he’s eager to see his fans’ faces in front of him again, rather than through a screen, or not at all.

“You know how it is when you far away from somebody then you finally get back with them,” he says with an audible smile. “You can just stay there all day and hug on ’em and remember why you love ’em. It’s the same thing. It’s gonna be great.”

At just 24 years old, Willis has already impressed at every possible turn. He earned a Grammy Award nomination last year for Best Traditional Blues Album for his sophomore release, “Spectacular Class.” After picking up the guitar at age 14, Willis taught himself to play multiple instruments in the traditional roots of the blues. And then Taj Mahal found him, calling Willis, “…my Wonderboy, the Wunderkind. Jontavious is a great new voice of the 21st century in the acoustic blues.”

“I think one of the most important parts of the blues is the historical aspect and where the African-American heritage is within blues,” Willis begins of where he sees himself in the genre’s evolution. “Understanding how blues influenced the rest of American music, and how important it is to be conscious and also acknowledge the heritage and culture aspect of the blues. So, for me, it’s taking not only just the folklore, but also taking the heritage aspect of it and re-presenting it to people who might not know a lot about it.”

Even when they may not understand the heritage or the meaning behind it, after so many months without it, it’s no question that audiences have realized an acute new awareness of the comforting and uplifting power of live music.

“That’s why we listen to those songs that we already love so much and play them on repeat,” Willis says of that indefinable quality. “We already know what the words gon’ be, but it depends on what we going through, it hits a little different. So, it’s gon’ do what it always do. That’s one thing that will be around.”

WHERE — Walton Arts Center in Fayetteville

FYI — All patrons are required to wear a mask, and physical distancing will be implemented in the seating.