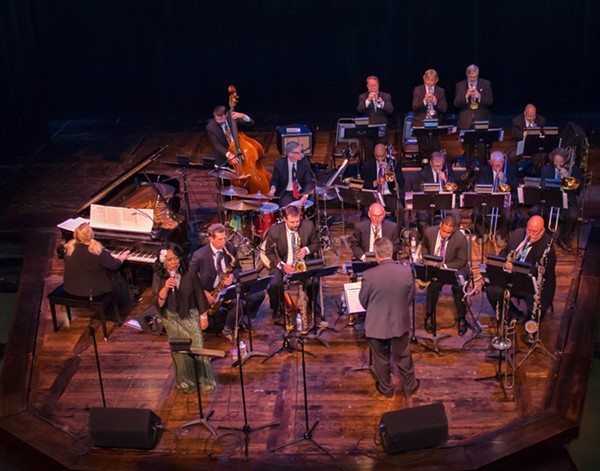 Les Délices, Cleveland’s period instrument ensemble that usually traffics in French music of the Baroque period, will collaborate with Boston-based Blue Heron ensemble in a series of concerts devoted to 14th-century music by Guillaume de Machaut and his contemporaries. The subject is an eternally thorny one: love and the lessons it teaches humans who fall under its spell. Singers Martin Near, Jason McStoots, and Sumner Thompson will join Debra Nagy (Medieval winds) and Scott Metcalfe (vielle and harp) in performances in Akron (Thursday, January 16), Lakewood (Saturday, January 18), and Shaker Heights (Sunday, January 19). See our calendar listings for details, and click here for tickets.

Another collaboration will bring the Twin Cities’s new music ensemble Zeitgeist together for three concerts with their Cleveland colleagues of No Exit. “Here and There 2020” includes music by Michael Rene Torres, Jonathan Posthuma, Giacinto Scelsi, Daniel Nass, Tiffany Skidmore, Doug Opel, and Buck McDaniel, many of them premieres. The series begins at Kent State on Thursday, January 16 at 7:30 pm, with other performances at the Bop Stop on Friday, January 17 at 8:00 pm, and Heights Arts on Saturday, January 18 at 7:00 pm. No admission charge.

Cleveland Opera Theater’s {NOW} Festival — a look into the process of how operas are made in the 21st century — continues with a workshop performance of Griffin Candey’s Bernarda Alba (libretto by Caridad Svich). The show is in the fourth of a five-year development cycle, and you can see and hear how it’s shaping up on Friday, January 17 at 7:30 pm in Gamble Auditorium at Baldwin Wallace.

{NOW} Festival events on Saturday, January 18 include a session at 11:00 am with author and playwright Calvin A. Ramsey about the launch of a new opera based on The Negro Motorist Green Book, a 2:00 pm progress report on Dawn Sonntag’s Coal Creek in the second year of its development, a 4:00 pm reading of Sabina Balamo’s libretto for Griffen Candey’s The Woman in the Wall, and a 7:00 pm panel discussion moderated by Mike Telin about creating, developing, and producing a new opera with leaders in the field. All Saturday’s events are free and will be held in Fynes Hall at Baldwin Wallace.

Cleveland Jazz Orchestra will observe Dr. Martin Luther King Jr.’s birthday with a concert at the Maltz Performing Arts Center on Saturday, January 18 at 7:30 pm. The Cleveland School of the Arts Concert Choir, vocalist Reginald Bowens, and a diverse set of religious leaders will be on hand, and the celebration will include jazz and gospel selections, Duke Ellington’s “It’s Freedom” (Sacred Concert), and music by Herbie Hancock, Geri Allen, and CJO director Paul Ferguson. The concert is free, but the Maltz would like you to register in advance for this event on its Silver Hall Series.

Pianist and improviser Gabriela Montero will be the center of a Tuesday Musical program on Tuesday, January 21 at 7:30 pm at the Stage Door of Akron’s E.J. Thomas Hall dealing with emigration (with music by the Russian composer-pianists Rachmaninoff, Prokofiev, and Stravinsky) and immigration (with her improvised score to Charlie Chaplin’s The Immigrant). She talks about the program at 6:30. Click here to reserve tickets for the concert, which features open cabaret seating.

For details of these and other classical concerts, see our Concert Listings page.