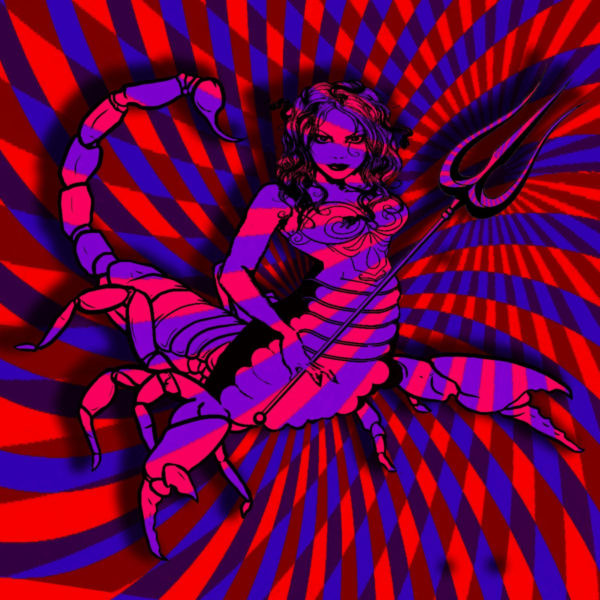 Neptune, New Jersey-based rock trio, The Atomic Bitchwax, recently announced the release of their forthcoming eighth full-length studio album, Scorpio, slated to be released August 28, via Tee Pee Records. According to a press release, “The group, which originally formed in the mid-90s, consists of lead vocalist/bassist Chris Kosnik, drummer Bob Pantella, and guitarist Garrett Sweeny, all of whom are past or present members of the band Monster Magnet. Scorpio is the follow up to the group’s 2017 full-length ‘Force Field‘, and their eighth studio LP overall spanning more than two decades.”

The lead single from The Atomic Bitchwax’s forthcoming musical offering is the title track “Scorpio,” a no holds barred, straightforward metal banger. The hard hitting cascading drums and equally rapid piercing strings introduce a gut punch of an intro to the track. The kinetic energy of the track doesn’t let up, with a music video that features the band rocking out to trippy, psychedelic imagery in the background. To listen to “Scorpio” stream below, via YouTube.

The aforementioned press release furthers that, “In a busy three years since NJ’s most powerful power trio issued 2017’s Force Field, they’ve toured the US and Europe multiple times over, taken part in fests far and wide, and blown past the 20th anniversary of their self-titled debut album. Scorpio acknowledges the two-decades milestone in its opening revamp of the first song the band ever wrote with vocals, ‘Hope You Die,’ the crash-in of which will be immediately familiar to anyone who’s seen them live. A generation later, it still gets the message across.”

As previously reported in the review for The Atomic Bitchwax’s last studio album 2017’s Force Field, here on mxdwn, “As one can imagine, the band’s past work is very much an indicator of their sound on Force Field. The overall sound of The Atomic Bitchwax is similar to that of Wolfmother, among other modern rock acts. The Atomic Bitchwax differentiate themselves with their nonstop instrumental speed and straight-shooting vocals. Anyone who is a fan of pure rock would enjoy the band’s song catalog they’ve built over the years.”