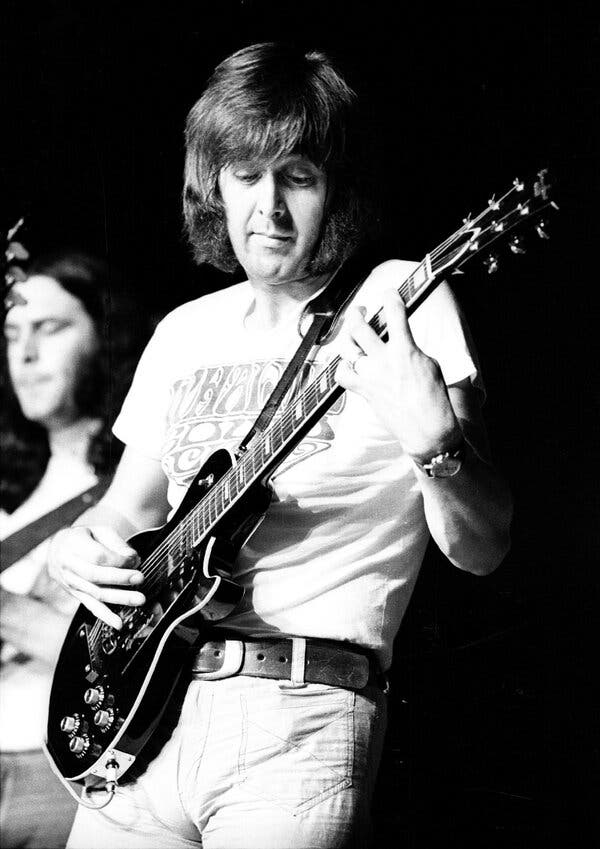 Spencer Davis, the leader of a rock group under his name that had some of the most propulsive and enduring hits of the 1960s, including “Gimme Some Lovin’,” “I’m a Man” and “Keep On Running” — all sung not by him but by a teenage Steve Winwood — died on Monday in Los Angeles. He was 81.

The cause was pneumonia, said Bob Birk, his booking agent and friend, adding that Mr. Davis had been hospitalized for the last week.

But it was Mr. Winwood, who was only 15 when Mr. Davis discovered him, who emerged as the group’s star, singing lead on its hit singles and later becoming an essential figure in British rock through his work with the bands Traffic and Blind Faith and in a long solo career.

The band did not have similar success in the United States, but a song co-written by Mr. Davis and recorded by the band that year, “Don’t Want You No More,” became significant in 1969 when the Allman Brothers recorded a cover version as the opening track on their debut album.

Mr. Davis later had a fruitful career as an A & R executive at Island Records, where he signed the hit punk-pop group Eddie and the Hot Rods and the respected reggae band Third World.

Spencer David Nelson Davies was born on July 17, 1939, in Swansea, Wales. He later dropped the “e” in his surname because “Davies” is pronounced “Davis” in Britain but “Daveys” in the United States, where he hoped to expand his career.

Mr. Davis grew up during the Blitz. “The bombed city center was my playground as a child,” he told the website Music Illuminati in 2016. “I watched the town being absolutely destroyed.”

His father was a paratrooper during World War II, while his Uncle Herman, who played mandolin, was a musical influence on young Spencer: At age 6 he learned harmonica and accordion.

After graduating from the Dynevor School at 16, Mr. Davis moved to London and found clerical work with a bank and the government customs and excise department.

Crushed by the dullness of that work, he went back to school at 20, studying German at the University of Birmingham. He also became fluent in French and Spanish, skills that later helped his band become popular throughout Europe. Among musicians, he earned the nickname Professor.

Music, however, remained his muse. In Birmingham, like many young British musicians of the day, he formed a group specializing in skiffle, a homespun British blend of blues, jazz and American folk. He also performed in a band (and became romantically involved) with Christine Perfect, who later married John McVie and, as Christine McVie, became a core member of Fleetwood Mac.

“There was this kid playing piano like Oscar Peterson and singing like Ray Charles,” he told The Guardian in 2014. (Mr. Winwood also played guitar.)

Mr. Davis hired Steve Winwood for his band, taking on Muff, who switched from guitar to bass, only because he could drive his underage younger brother to gigs. With Pete York on drums, the group became known as the Rhythm and Blues Quartet and performed R&B covers in Birmingham clubs before landing a steady gig at London’s high-profile Marquee club.

The band’s name was changed to the Spencer Davis Group in 1964. As the story goes, the other members agreed to the new name because Mr. Davis was willing to do interviews, allowing them to sleep longer.

The group’s live reputation attracted the attention of the music executive Chris Blackwell, who became its manager and signed it to his fledgling Island label, which was then distributed through the larger Fontana Records. The band’s first single was a cover of the blues artist John Lee Hooker’s “Dimples,” which appeared on its debut album, titled “Their First LP,” in 1965.

By the start of the next year, the band had a No. 1 hit in Britain with “Keep On Running.” Written by the Jamaican artist Jackie Edwards as a skeletal ska piece, the song was transformed by the band into an exuberant, Motown-style R&B rave-up. To get a distinct tone for his lead guitar, Steve Winwood used the same fuzz pedal that Keith Richards had employed on the Rolling Stones hit “Satisfaction.”

“Keep On Running” reached No. 3 in Britain but only No. 74 on the Billboard chart in the U.S. “The Second Album,” which included “Keep On Running,” wasn’t even released stateside.

The Spencer Davis Group’s peak arrived in late 1966 and early 1967 with a one-two punch, starting with “Gimme Some Lovin’,” written by Mr. Davis and the Winwood brothers, which was fired by Muff Winwood’s dynamic bass line but was most notable for his brother’s surging Hammond organ and ecstatic vocal. It sold more than a million copies and became a touchstone of British R&B, as did its follow-up, “I’m a Man,” written by Steve Winwood and the group’s producer, Jimmy Miller. “I’m a Man” was also a million-seller and became a hit again in 1969, via a cover by the American horn band Chicago.

The members of the Spencer Davis Group appeared as themselves in the 1966 British musical comedy “The Ghost Goes Gear,” but the group was unraveling. Yearning to explore a more expansive range of styles, Steve Winwood left to form Traffic in 1967, while his brother became an A & R executive at Island Records.

Wounded by the departures, the resourceful Mr. Davis rallied, forming a new band with Phil Sawyer on lead guitar and vocals and Eddie Hardin on keyboards and vocals. That band contributed half the tracks to the soundtrack of the 1968 British comedy “Here We Go Round the Mulberry Bush”; the rest were provided by Traffic. That year the group also released the album “With Their New Face On,” whose vigorous, string-driven lead single, “Time Seller,” anticipated the hit sound of the Electric Light Orchestra.

Even before the album’s release, Mr. Sawyer, who shared lead vocals on “Time Seller,” departed, replaced by Ray Fenwick. The group’s unsuccessful follow-up album, “Funky,” released in 1969, featured the future rhythm section of Elton John’s longstanding group: the bassist Dee Murray and the drummer Nigel Olsson. That version of the band disbanded shortly thereafter, at which point Mr. Davis moved to California.

Much of the “New Face” lineup reunited in 1973 for two albums, “Gluggo” and “Living on a Back Street,” before collapsing once again. Mr. Davis went on to release solo albums that emphasized acoustic blues and jazz. By the late ’70s he had transitioned into a job at Island Records.

In 2006 he began regularly touring with various musicians under the Spencer Davis Group banner, often including his original drummer, Pete York.

For all the success Steve Winwood went on to enjoy, Mr. Davis always believed that Mr. Winwood had been rash in leaving his band at the height of its popularity. “Steve,” he told the magazine The Guitar in 2014, “never sounded so good as he did with us.”