“Ever since we got the right the vote…Some people be willing to die to vote,” raps Lateef the Truthspeaker in “Election Time” by Roots & Tings. The three-man group featuring the Oakland emcee, reggae music’s Winstrong and San Francisco DJ Jah Yzer unleashed the new song this weekend for the final stretch of the season as a reminder that voting is your right.

“Times are extremely hard, the oppression, misogyny, class problems,” said Lateef. “Dropping a record in these times gives people something they can use right now.”

“Our mission is to give information and support people throughout this time of so much confusion,” added Winstrong.

Over the summer Roots & Tings released “All of This,” an album of lyrically potent material available for streaming and as a set of vinyl 45s that was recorded in the past two years at Oakland’s Zoo Labs.

Among their stack of tracks also emerged “We,” a solidarity and unity anthem offered to the various artists’ compilation album “Talk-Action = Zero,” helping raise awareness for Spread the Vote. The organization provides practical assistance to obtain voter ID in states that require it, along with registration and education for people between 18 and 49 who have never participated in the process or who feel shut out because of immigration or former incarceration status.

“I understand why people feel disenfranchised and why they feel the government doesn’t represent them in the slightest,” said Lateef. “It’s still important to do your civic duty.” 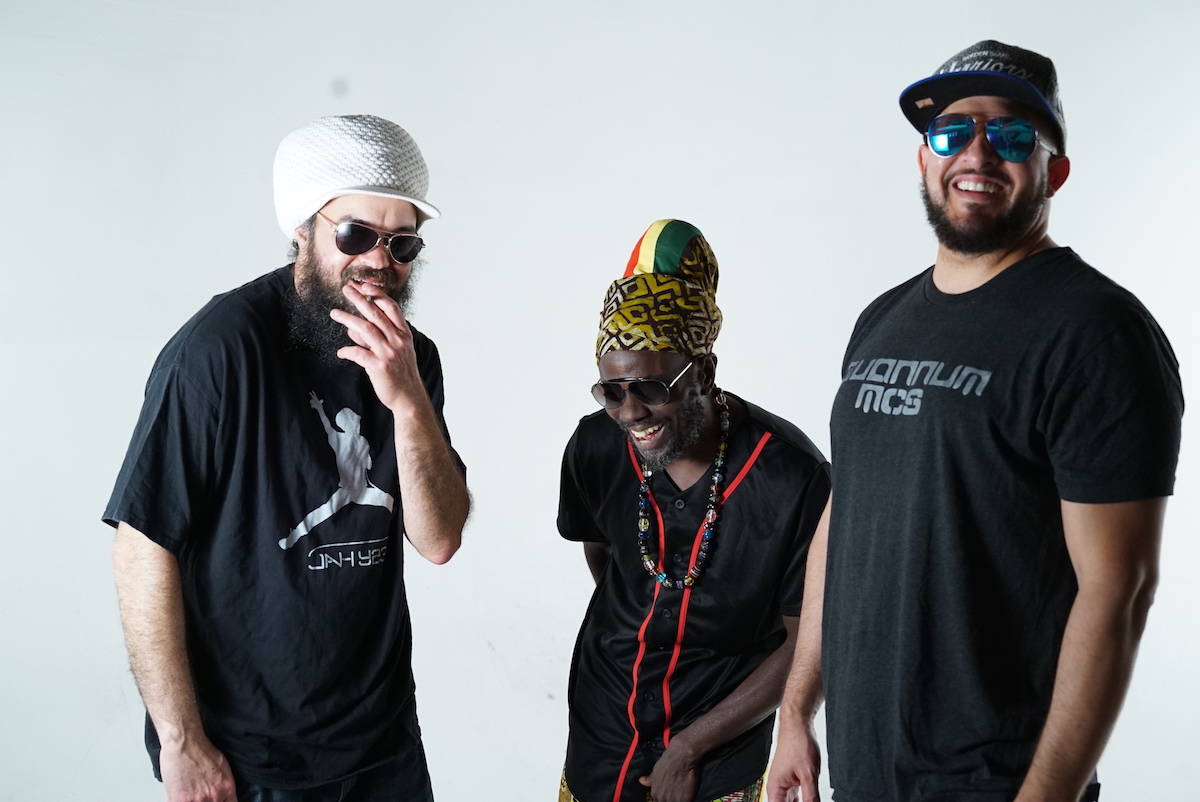 Lateef’s musical roots were planted in the Nor Cal hip hop collectives SoulSides Records and Quannum Projects from which grew DJ Shadow, Blackalicious and Latryx, his collaboration with Lyrics Born. His personal ancestry is part Puerto Rican with one foot in Oakland’s founding chapter of the Black Panther Party and the other in the South, New Orleans to be specific. (He was born Lateef Daumont.)

“There’s a saying I heard growing up: No participation, no right to speak,” he said. “If you don’t vote, you can only get so mad about this authoritarian regime.”

Noting the political and philosophical differences amplified by COVID-19, Jah Yzer said, “Once we all unite, this is something we can fight against together.” The soft-spoken turntablist who’s playing a key role in the group’s outreach while live performances remain on extended pandemic pause, added, “We gotta stick together.”

“Jah Yzer might be one of the most famous people in San Francisco you’ve never heard of,” said Lateef of his bandmate’s popularity in clubs and livestream platforms. ”It’s hard to sit down to eat or even walk down the street with him.”

Winstrong added, “We have our vibe when we link together, but you can get it by just listening to Jah Yzer play. He’s an extension of the group.”

Yzer livestreams most mornings as well as on Tuesday night during his old time slot at Haight Street’s Milk Bar where he’s played his Bless Up sets for 17 years.

“It’s been fun with the live streams,” he said. Drawing a multigenerational listenership among parents with children at home, “Youth is getting exposed to the music,” he said. He’s also noticed a resurgence of old school reggae. “One of my most-listened-to streams is ska and rock steady from the early ‘70s.”

Back in 1973, reggae was just beginning to be exported from Jamaica. Bob Marley and the Wailers made their first appearance in San Francisco at the Matrix and laid down their well-circulated live recording from the Record Plant in Sausalito. By the ‘80s, the reggae scene here was running deep. (The Examiner covered it with some frequency.)

Bolstered by radio programs on KPOO, KUSF, KPFA and KTIM in the North Bay, DJ Doug Wendt broadcast then mobilized his Midnight Dread sound system and brought it to the clubs while reggae artists from Jamaica and the U.K. found hospitable stages for their work here, often alongside punk and underground musicians. Some artists, like Earl Zero, came to stay.

Like its brethren calypso, reggae is some of the fiercest message music on the planet, and its “conscious” strain, as it is known among enthusiasts, was a natural fit for the Bay Area.

Lateef remembers when Jah Big ruled the scene and “Club Dread at the End-up, on a Monday night, was packed.”

Yzer arrived here in the ‘90s from South Miami and naturally gravitated to the spots where reggae, hip hop and international records fit easily into the mix, whether at the African Outlet shop or clubs from 111 Minna to the Justice League. Introduced to reggae by his old neighborhood’s Caribbean community who favored it at neighborhood functions and parties, “It caught my ear,” he said. He also dug his brother’s collection of classic ‘80s sides by Marley, Steel Pulse, Third World and Aswad.

“Little by little, I got my own collection going. One of the first people to sell me records on the street, on the way to school, was Chinese Jamaican DJ Supa Dups,” he said. (Dups would go on to produce and remix massive records for Drake and Rihanna, among others.)

“My family is Argentinian and I grew up on music from South America, Victor Jara from Chile,” he said. “And I remember when Rhodesia became Zimbabwe,” which, of course, Marley had written about in a song.

“Between the three of us, we have a pretty strong revolutionary background, we come from revolutionary people,” said Winstrong, originally from Suriname. “It’s right across from Trinidad. It suffered a few coups,” he said. “I’m basically the child of an immigrant mother and father who had to run for political reasons and never went back.” He’s since lived in Jamaica and Hawaii and counts recording sessions with artists from Junior Reid to Snoop Dogg among his credits.

“The music is an organized expression of things we’ve been through,” said Winstrong, literally demonstrating resilience under pressure as he phoned from Sonoma County’s fire zone where he was on high alert for evacuation.

“The three of us are different but have a ton in common,” said Lateef. “We came together and created a community. We want to build that community.”

Though little in the way of community or relief has been offered by national institutions to grassroots clubs, musicians and independent performers (along with people of color and immigrants who have suffered disproportionately during the pandemic), there may be a smidgen of hope on the horizon.

Last week, a Biden/Harris campaign ad acknowledged the pandemic’s toll on live music, implying that there may be help on the way. Though until then, in lieu of anything tangible people are making do with what they’ve got.

“Musicians in the Bay Area, starting with us, have got to learn new ways of connecting virtually with family, friends and fans,” said Winstrong. “To be able to see each other and have this process be more effective is part of the healing process: Audio healing, streaming healing. It makes a difference.”

Denise Sullivan is an author, cultural worker and editor of “Your Golden Sun Still Shines: San Francisco Personal Histories & Small Fictions.” She is a guest columnist and her point of view is not necessarily that of the Examiner. Follow her at www.denisesullivan.com and on Twitter @4DeniseSullivan.

If you find our journalism valuable and relevant, please consider joining our Examiner membership program.
Find out more at www.sfexaminer.com/join/