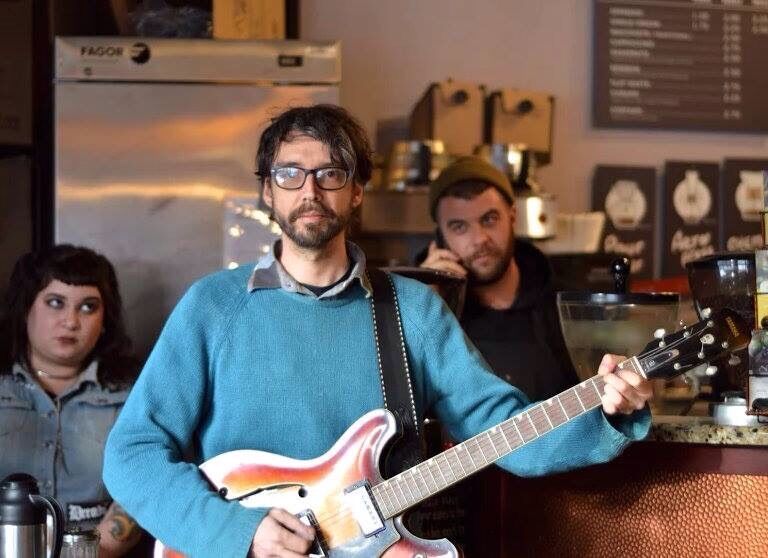 Meet a Musician: Matty Sheets finds his musical home in blues and post-folk

Matty Sheets is inspired by a moment on an old recording by blues artist Mississippi Fred McDowell.

“There’s this one take, where the drummer is kind of playing just a little bit ahead of the beat, and Mississippi Fred McDowell says, ‘Take your time,’” Sheets said. “And when it keeps happening, he yells ‘Take your time!’”

For Sheets, that’s a mark of a real old-style blues player, a willingness to take things a bit slowly.

Sheets, who leads local group the Nervy Bees and, until the pandemic hit, hosted a regular open-mike night at Westerwood Tavern, has long been a fan of traditional blues.

In a recent interview he spoke about how the blues have influenced him, about how his multiple sclerosis inspired a recent song, and about watching a fight break out at a show in Raleigh.

What got you into music?

I started playing guitar when I was 8. But, I didn’t learn a chord in a year, and I quit, and I still think that guitar teacher was taking advantage of my parents.

I eventually moved back to guitar when I was 15 or 16. I had a friend who wrote songs and they were really cool and funny, and we played together a lot. That was also a big inspiration to write songs. And once I wrote one song that people responded to, I just got addicted to that. It was the first song I wrote that was honest with my emotions, I suppose. It was relatable.

Who are some of your inspirations?

I was into grunge in the ‘90s, early hip-hop. It was weird when underground stuff started getting popular.

But, after that, I got exposed to early blues players, through Robert Johnson. I was out of town and went to this cool CD store, and they had a special for his complete recordings. It was affordable and I bought it, and I listened to it for I don’t even know how many months. I was researching it. And I just got sucked into those early blues players. I still feel like that has influenced me more than anything. I also like Tom Waits and Willie Nelson and feel that they’ve been influenced by the early blues, and early rock ‘n’ roll, too.

How would you describe your music?

In the early 2000s, there was this whole anti-folk thing in New York. And it was mostly interesting people playing folk music. There was not anything that was not folk about it. I don’t remember how the conversation went exactly, but one of us decided we’re going with “post-folk.”

I feel like I mostly play blues — not necessarily the 1-4-5 blues structure, although I do that quite often.

I will tell you about the song I’m working on right now. A lot of times, I will write about a situation I have going on in my life.

I finally finished the process of applying for disability. I was diagnosed with MS almost four years ago. And, I’ve been in this last stage of applying for disability this last year. And I figured this was going to happen. And, they didn’t approve it. But that happens to almost everyone at first. And they get it after they appeal a bunch of times. That’s the process.

I started with some things that I wanted to say, and then I sat with a guitar that I love for a while, and started seeing what came out. And once I’m comfortable with it, I’ll try singing and see if more words come out during the process of that, which they always do, and it’s very nice.

If you could open a show for any artist, who would it be and why?

Right now, I’m in a battle between telling you Norah Jones and M. Ward.

Norah Jones, right now, is doing livestreams from home, kind of like what I’m doing. I try to watch her before I perform, because it’s like you’re sitting there next to her. It’s cool.

M. Ward is a huge inspiration. I feel like he’s a happy mystery to me.

Do you ever sing karaoke or sing in the shower?

Definitely not karaoke. I really don’t like karaoke. Everybody has this sort of cocky attitude, because they just sang on a microphone, which is a rush. I get that that feels good. But most of the musicians I know are overwhelmingly nice people. They’re not cocky, they’re not like “Hey, did you just see me?”

As for singing in the shower, I’m sure I have. But, these days, I have a balance problem, so I pay attention while I’m showering.

What’s the funniest or weirdest thing that has happened at one of your shows?

Back in the day, I was out of town with my band, Eating the Invaders. We were playing Raleigh, and we’re playing outside this sandwich shop. The sun’s going down, and the people had apparently been drinking for a while. There was one dude who had his head down on the table in front of a slice of pizza, and he’s reaching for it with his mouth.

So, anyway, we’re having a good time, it’s like a party. Then this other guy, he just lost it. And a fight is happening right there in front of me. Seriously, there’s only 12 people out where we are, and two of them are fighting, and everyone else is trying to get out of the way.

And, I just started playing this one song that I have that starts with, “Take me home right now, I can’t drink anymore tonight.” I was singing it extra slow, trying to calm things down. After the song, I said, “Thanks for being nice people and for spending your evening with us.”

What’s your favorite song to perform?

It’s a song called, “Hit the Road.” I just opened a Martha Bassett show with it.

It feels like what’s happening in life right now, about wanting to get on the road, and just trying to do your best. It’s nice that I can write something that when I’m singing it, it can make me feel good.

What’s next for you?

Recording another album. I’ve got a few new songs with the band, the Nervy Bees, and more that I’ve written during this pandemic. It’s nice to work with other people. I definitely have my moments where I have to be in control of everything. But, it’s nice to be with other people, playing off each other.

In the future, future, I would like to do a tour, when we can do it again. I’d like to go see my friend out in Portland. I do miss playing real live shows for sure.

For Greensboro Ballet, ‘The Nutcracker’ moves to the drive-in

While ballet companies across the country have canceled their annual holiday productions of “The Nutcracker” because of the COVID-19 pandemic, Greensboro Ballet has come up with an alternative.

Natty Greene’s Brewhouse on Gate City to close indefinitely because of pandemic; the downtown location will remain open

GREENSBORO — Natty Greene’s Brewhouse on Gate City Boulevard is closing indefinitely as a result of the COVID-19 pandemic.

You have questions. I have some answers.

The concert will feature the Greensboro Symphony Orchestra performing live, to picture, every note from the film, “Harry Potter and the Sorcerer’s Stone.”

Julian Sizemore sits down at his keyboard to create, and imagines a painter trying to get a certain mix of colors on their palette.

Around the remote: Chuck Barney’s TV and streaming picks for Oct. 11-17

DON’T MISS: “The Amazing Race” — On your marks, get set, go! With so many of us stuck at home during the pandemic, the 32nd season of the glob…

Saxophonist Jack Wilkins lives in Florida now, but he feels himself called to North Carolina

He’s Santa with a saxophone, a jolly elf who returns to town every Christmas to spread musical yuletide cheer as Piedmont Songbag’s reed man e…

Chocolate and blueberry muffins, whoopie pies and peanut butter and chocolate crackle bars are among the items offered at the Oh Goodness bakery.

New this week to TV, streaming and more: David Byrne, ‘The Amazing Race’ and Tommy Lee

Broadway’s closed, but you can still feel the thrill of being inside a packed house in “David Byrne’s American Utopia.” Here’s what else is new to TV, streaming services and music platforms this week.