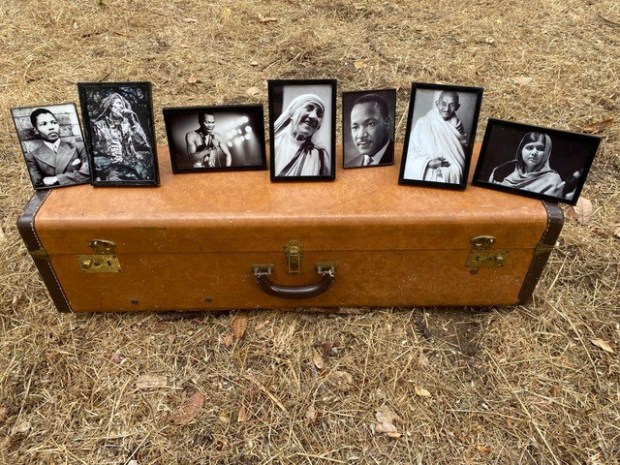 With the presidential election less than six weeks away, a powerful new music video by a Marin band sends a message to the current occupant of the White House, and a fascinating new documentary available from the Smith Rafael Film Center makes the case that rock ‘n’ roll powered our 39th president into office. It just couldn’t keep him there.

The band Kana Mota, featuring Marin couple Monroe and April Grisman, has just released “Mr. President,” a song and video two years in the making that bounces along on a buoyant reggae beat while name-checking many a famous champion of peace and justice, both past and present, while chiding the Republican incumbent for not being more like them. (Not that he ever could be.) But the video, shot in Petaluma and West Marin, is inspiring and hopeful nonetheless. In a truly grand finale, more than 100 friends, family and fans contributed to a stunning photo montage that closes the video in a warm glow of candlelight.

The documentary, “Jimmy Carter: Rock & Roll President,” which is available online at Rafael@Home through the end of the month (rafaelfilm.cafilm.org/jimmy-carter), tells the little-known story of how Carter’s friendship with the Allman Brothers, Bob Dylan, Willie Nelson and other musicians gave him the money and the momentum he desperately needed to win the Democratic primary over Jerry Brown and ultimately, the 1976 election over Gerald Ford. If, like me, you thought Bill Clinton was the first rock ‘n’ roll president because he famously played saxophone on “The Arsenio Hall Show,” this film will come as a rockin’ revision of musical and political history.

“One of the things that has held America together is the music that we share and love,” Carter says in the film.

The Grismans and their Kana Mota bandmates, guitarist Eric Chaffin and bassist Chris Manning, cowrote “Mr. President,” recording it at Manning’s Salamander Sound in San Rafael. Feeling an urgency to get the video released to the public before the election on Nov. 3, they shot it in one marathon 20-hour workday, braving thunder, lightning and a wildfire to do it.

“That was the driving force,” says April, who sings the lead vocal. “We realized this song made a statement that wasn’t just about the president. It’s about remembering our great leaders, our ancestors, who they were and how they fought for justice for everyday human beings. That was part of the message of the song. With the election coming up, we wanted to make sure the video complimented that.”

I’m amazed at how many progressive heroes the band were able to shoehorn into the song, singing their names and flashing their photos in the video. Working with director Tim Manning, Chris’ brother, they seamlessly managed to get in everyone from Bob Marley, Mother Teresa, the Rev. Martin Luther King Jr. and Gandhi to Frederick Douglass, Malala Yousafzai and Nelson Mandela, to name a few.

“It took a long time to fit all those people in,” says April and laughs. “While I was in the booth singing, we were shifting people around, saying, “What about so and so?” We were trying to allow these names to come forward.”

“We chose that name because music has the power to be a foundation in people’s lives,” Monroe says.

For him and April, the most moving part of the video is the photo montage at the end. Before the video shoot, they put the word out to their families and friends to send them a photo of themselves with a candle flickering in the foreground, an idea inspired by an altar April keeps in their Novato home. The response was overwhelming.

“I thought that would be an inclusive way for us to connect because we are all connected,” she says. “It takes the support of everybody to make a change. I think that came out so powerfully. Every time I see that particular part of the video, it really gets to me.”

Speaking of impressive names, some of the biggest stars in popular music were interviewed for the Carter documentary, including Bono, Paul Simon, Garth Brooks, Trisha Yearwood, Rosanne Cash and Jimmy Buffett, among others. Producer Chris Farrell originally intended the documentary to be about the Allman Brothers until he learned about the band’s friendship with Carter, how they helped this obscure Georgia peanut farmer get elected and what a huge music fan he’s always been, hosting rock, jazz, country and gospel concerts in the White House. There’s some fabulous footage of those shows in the film. Director Mary Wharton calls it “a history lesson you can dance to.”

“I had no idea President Carter had all these musical friendships,” she says. “Carter comes across as a little bit of a square and a fuddy-duddy. But, that’s a misconception about his personality. That we were blessed to get such an incredible cast of musicians is testament to the respect he had among all the people he met.”

While the musicians were supportive of him, he was loyal to them in return, even when it wasn’t politically expedient for him. The most striking example of that was when Gregg Allman was busted on a cocaine charge, causing a scandal that could have been damaging to Carter’s presidency. Carter stuck by him anyway.

“People who worked with the president told him he should distance himself from Gregg, that it would be political suicide otherwise,” Wharton says. “But he didn’t care. He realized that Gregg needed a friend more than ever.”

This film is like a refresher course on the politics and global events of the 1970s that would plague Carter’s term and ultimately bring him down, namely the gasoline shortage and the Iranian hostage crisis. But it reminds us that Carter not only won the Nobel Peace Prize but he succeeded in getting all 52 hostages released unharmed, even though it came after he’d lost the election to Ronald Reagan.

As Dylan says in the film, “He solved the hostage crisis with humility and in a peaceful way. It took a lot of courage to do that.”

At 95, Carter continues his life of public service with his foundation, Habitat for Humanity and other causes. People sometimes think he’s been a better ex-president than president. After seeing this film, I’m convinced history will hold him in high regard, both inside and outside the White House.

The documentary was supposed to have its world premiere at the Tribeca Film Festival in April, but the pandemic put a stop to that. Without much fanfare, the filmmakers released it anyway.

“It’s a terrible time to release a film,” Wharton says. “But we felt like it was important for it to come out now, offering a ray of sunshine in an otherwise dark time.”