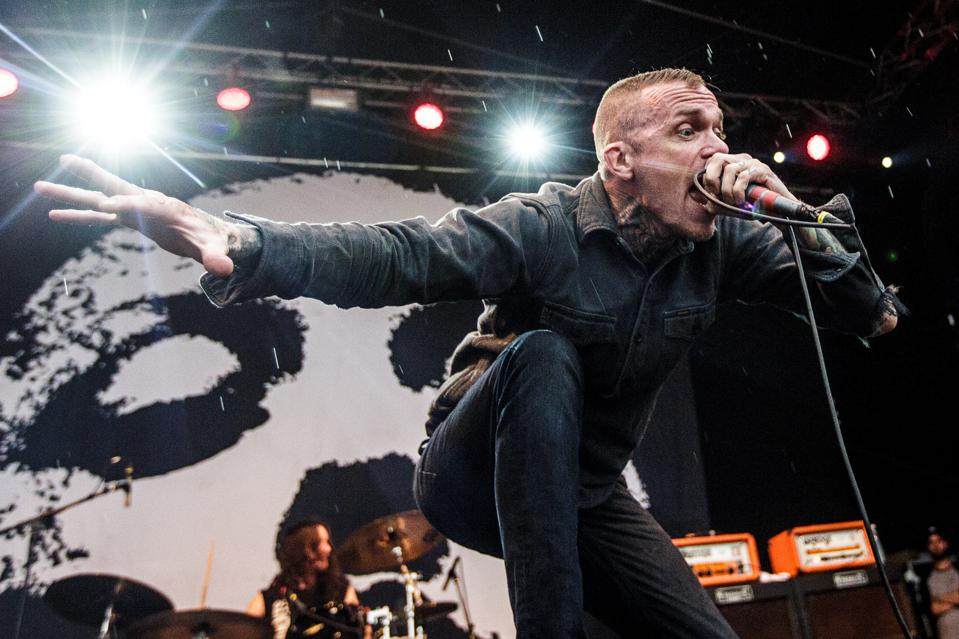 Blood From The Soul is somewhat of a ‘supergroup’ phenomenon in the heavy music world. The project was started in the early 1990’s and spearheaded by Napalm Death bassist, Shane Embury, who had recruited vocalist Lou Koller (Sick Of It All) for their 1993 debut, To Spite the Gland That Breeds. At the time, this record was considerably far from the norm of the vastly popular rock and metal sub-genres, specifically the grunge and groove metal waves of the 90’s.

The record took a fairly industrial metal approach with it’s programmed drums and overall mechanical atmosphere, to which have now become more widespread and beloved tropes in a number of modern metal bands. And while the album left a mark on only a small subset of the underground music community, it was a formidable impression that has since lead to a complete ‘reboot’ of the power project in 2020.

Similar to how movies and other media get revitalized, Blood From The Soul has been ‘rebooted,’ as in the project has seen a complete sonic and line-up overhaul. Gone are the programmed drums and in are the new heavyweight recruits, namely vocalist/lyricist Jacob Bannon (Converge, Wear Your Wounds, Umbra Vitae), drummer Dirk Verbeuren (Megadeth, Soilwork), and bassist Jesper Liveröd (Nasum). And while Blood From The Soul is still the brainchild of Shane Embury, the band’s new millennium debut, DSM-5, is in large part helmed by vocalist Jacob Bannon.

The album is driven not only by his florescent array of aggressive vocal performances, but lyrically speaking it dives into conceptual yet relatable storytelling in the realm of science fiction. “Debris Of Dreams,”offers the first glance of these lyrical and instrumental intricacies, all while “sifting through” a number of metal and punk sub-genres.

Blood From The Soul are set to release DSM-5 on November 13th, under Deathwish Inc., the independent record label owned by none other than Jacob Bannon. Speaking more on the project and how it’s come to be resurrected almost 3 decades later, Jacob spills all the details regarding the band and their upcoming new album.

Were you aware or a fan of Blood From The Soul back when it was started by Shane in the 90’s?

Oh yeah, I remember I bought that record the day it came out, the original To Spite the Gland That Breeds (1993) record, that was my introduction to the band. It was a very exciting time for heavy music, and in that sort of sub-genre of heavy music a lot of people were starting to step out and do interesting things. There was a lot of Godflesh worship that was going on, and I think people downplay the importance of that time where they just say “bands were just aping other bands,” but really what was happening was Justin [Broadrick of Godflesh] opened up the doors to a lot of people that started to hear heavy music in a different way.

He wasn’t the first to sort of marry the worlds of industrial music and metal, there were a lot of bands that were similar, but he did it with a different kind of teeth and substance and it really related and resonated with a lot of musicians at the time. Bands like Blood From the Soul, Meathook Seed, and Pitchshifter all started to happen all kind of at once, and it was a really cool time for heavy music at least from my perspective being a fan of it. And this is one of the projects that I paid attention to because I was a young hardcore and metal kid, and just hearing about a project that was [Shane Embury] from Napalm Death and Lou [Koller] from Sick Of It All was a dream come true for teenage me.

So almost 3 decades later, how did this project get rebooted? How’d you come into the fold as the vocalist?

Shane approached me to work on the project with him, and I’ve known Shane in passing from touring over the last number of years, and we’ve stayed in touch with each other here and there. But the email kind of came out of the blue, I knew that he was working on bringing the project back to life at some point, and for the last couple of years there were some rumors about other musicians that he was trying to work on it with, so I thought he was already kind of going that route. So when I heard from him it was surprising and welcoming, and it just sounded like a really fun challenge to be honest.

I’m used to writing material in my other bands that’s rooted in life experience, I’ve never really tried to write anything that hasn’t been ‘non-fiction,’ for lack of a better terminology in terms of lyrics. This to me was an interesting challenge where I could write from a different perspective, and still put in my own life experiences and attach a variety of different metaphors that relate to today and contemporary society. It was a whole different animal and I was just like “yeah this sounds exciting, I’d love the opportunity and I’d love the challenge.”

So at that point, [Shane] sent me some demos and ideas and he told me who else he’d been talking to about working on the project with, and he already had Dirk [Verbeuren] from Megadeth lined up as the percussionist. The previous record, [To Spite the Gland That Breeds], was all drum machine so that was already pretty exciting to me because you have this monster drummer doing this, and I got in touch with Dirk to just get the feel for what everybody was looking for and put the challenge on.

With this record being a concept album, one that’s delves into sci-fi and dystopian concepts, where did you draw the inspiration and ideas for the lyrics?

I had some guidance in the sense that there was a previous record that existed, and that record wasn’t a concept record but it had some loose themes attached to it and some visual character that I found relatable and exciting. And if I was to be part of this I wanted to do something different and challenging, so I brought up the idea of making it a pseudo-concept record, in terms of taking inspiration from bands like Voivod and bands that have explored these sort of ideas, and really just push them to a different level and try to tell a story that relates to our time.

I could have just written more personal songs, and to me that’s fulfilling and that’s exciting in its own way, but I figured I’m 43 I want a challenge and this sounded like a really challenging one to try to take on. So I ran the idea by Shane of what I wanted to do with the lyrics, some basic song title ideas, how I wanted the pacing of things to go, and I wanted the album to sort of start and end a certain way so that it reads a specific way as the listener would follow along.

Similarly to how I perceive science fiction operating within peoples lives in terms of books, comics, and movies, like Prometheus of the Alien franchise isn’t just about aliens, Dawn of the Dead and Day Of The Dead are not just about Zombies. There’s a lot of social fabric that’s sort of interwoven into what I’ve worked on in my contributions to this record. I’m just really excited about that, it’s a unique way of doing things that I’ve never done.

Will Blood From The Soul be one of your main bands in addition to Converge and your recent new death metal band, Umbra Vitae?

So I was doing Umbra [Vitae] right about the same time as I was working on this album, and this is right before the COVID-19 shutdowns happened, so I was working on these things and the idea of Umbra is to be a proper band, so that’s a proper band that will function and tour and write as a proper band does. [Blood From The Soul], because of the logistics of being spread out as far as we are, I think this is more of a project, but that’s not to say that we don’t have any aspirations to do anything live in the future.

It all just came together in such a weird time where life essentially has been put on pause, so we don’t really have a start time for that stuff. And when the time comes, by that time there will be a new Megadeth album out, there’s already a new Napalm Death record, and there’s countless other projects that are happening, and I don’t know if Jesper [Liveröd] is doing any other bands. The logistics of trying to keep everybody on the same page in terms of their schedules is going to be a challenge. We’ll just take it one step at a time and just get the record out and see what happens after that.

Vinyl recently outsold CDs for the first time since 1986. As the owner of an independent record label (Deathwish Inc.) what has it been like seeing the popularity of vinyl return over the years?

Well as a label owner it hasn’t returned, it’s always been there. And that mainly has a lot to do with the genre we’re apart of or the subculture that we’re tied to, it’s always been quite vinyl heavy. Since we started, I would think almost every release that we’ve ever done has had some sort of vinyl, and that really has never changed. What has been interesting is to see a lot of the major label world start to do reissues of records, just trying to give some sort of physical release to things that otherwise would have never gotten any attention.

That’s really what has created this new market for things. In terms of our business, if anything it’s actually causing challenges for us because pressing plans get busy. There was a point where we could get something pressed in four weeks time, and now things take anywhere between 90 and 120 days in manufacturing. So it just kind of changes how we plan on manufacturing records, and how far out we have to plan things, and other things like that. But to me music is music, the media is the vehicle and it’s always going to change.

I’m happy that people still care about physical releases because as a person and creator of music I like physical things. I like to hold a tangible piece of work that I’ve helped create, whether or not it’s one of my own projects or something that I released, it feels finished to me when I have a tangible item in my hands. And that’s not to say that digital music isn’t as relevant, it’s just a different way of looking at things, so I’m definitely not afraid of digital, we love digital too.