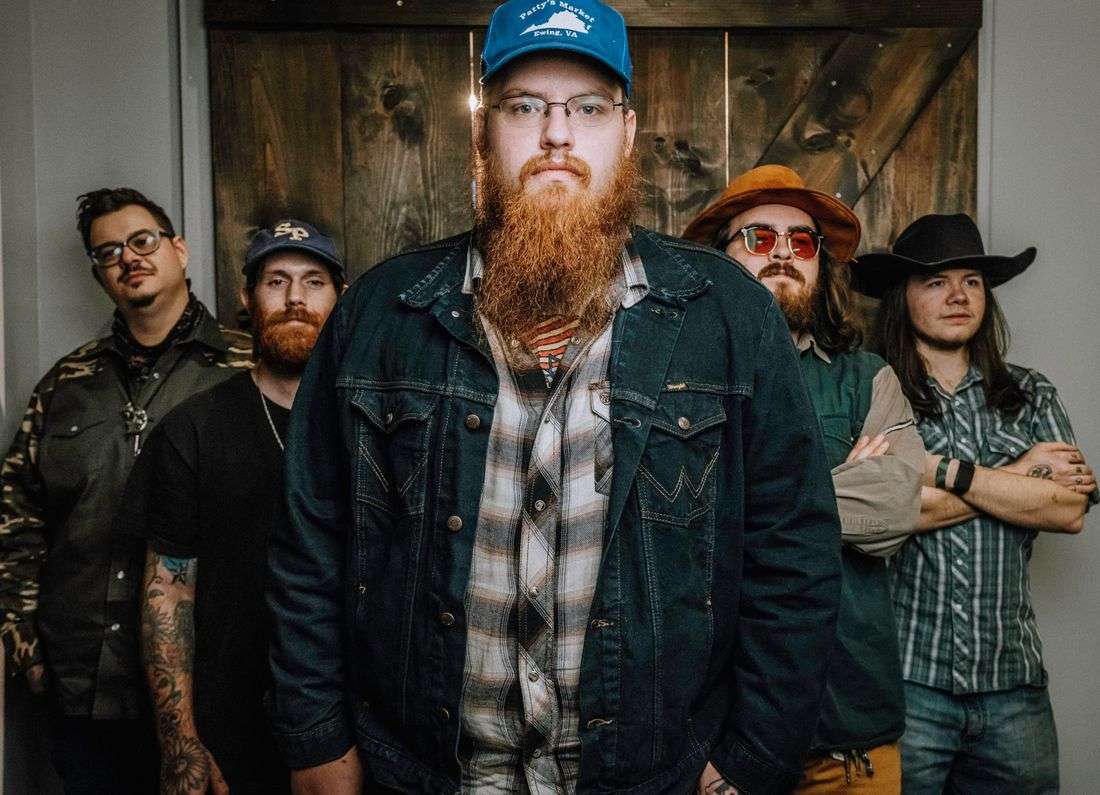 The up-and-coming Virginia-based band with a unique sound that incorporates rock ‘n’ roll, country, blues, bluegrass and soul, plays tribute to that stop on their new album, “III,” released earlier this month.

The band formed in 2013, right after Gibson, bass player Chase Chafin and Bus Shelton graduated high school in what Gibson called a “little bitty town in the coal field in southwest Virginia.”

Despite the rural location and lack of area musicians to choose from he said.

“We had enough buddies that we could wrangle together and jam some,” he said.

Dillon Cridlin and Noah Patrick currently round out the group on drums and steel guitar.

As time went on, the band began performing more original songs and released its first album in 2014.

“That’s where it all started,” Gibson said. “Here it is just some high-school buddies that got a hankering to play some music.”

It wasn’t long before they were touring the East Coast.

Another album was released, and the band began receiving more attention with 2020 looking to be a big year with yet another album planned and a larger tour in the works.

But then COVID-19 put almost everything on hold.

“We had plans to branch out big time this spring and had a lot of stuff on the books,” Gibson said.

Despite the setback, the band released its third album on Oct. 1 and is promoting as much as possible.

“The live music industry is pretty severally hindered by COVID, but we are getting out there as much as we can do responsibly,” Gibson said. “We’re staying after it.”

The new album reflects the efforts of the band to craft their unique sound.

“It was a big range of stuff,” Gibson said. “I think this is a much more varied series of songs in terms of what they do emotionally for the listener.”

While holding onto the diversity of sound, he said the album has a distinctly more county music feel than their previous ones. This is most noticeable on the opening track “Long, Hard Life,” with its driving classic country tone set on top of an almost funky drum beat and with an even more classic county song, “Why Else Would I Call You?”

But other tracks, like “The Road Home” and “You Never Did Love Me” slow down and relish in long and slow steel guitar riffs that almost seem to reflect the process of songwriting for Gibson.

“There is nothing that we do musically or lyrically either one that can be rushed,” he said. “It’s not something that is forced it is always sort of develops out of nowhere.”

Outside of his songwriting, he credits the band’s sound to having a diverse set of musicians that are empowered to incorporate styles of music they enjoy into the arrangements, creating a bluesy, country rockabilly mix that is hard to quantify.

“This one is definitely more of a country record than either of the previous two, but somebody threw the term ‘Appalachia soul’ on us at one point and that’s the one that stuck, more than anything. It’s not country music and it’s not blues music and it’s not rock ‘n’ roll. “It’s not any of those things and it is all of those things at the same time.”

That eclectic mix Gibson said comes from a diverse collection of music styles scraped from a youth on the internet and YouTube, and a desire to not emulate other bands.

“We never tried to sound like anybody,” he said. “You take five guys that like five different sounds, five different types of music and have five different backgrounds and you give them freedom to write their parts the way they want to and you wind up with something that doesn’t sound like (anybody else). I think that has been a big part of our success so far.”

He said growing up with the internet that allowed each of them to discover a wide range of musical styles and led him to dive into old blues and country music.

“That was a whole different level of inspiration that I had never heard before and been exposed to in my life that really inspired me to play and to write the way that I do now,” Gibson said.

“It’s a bittersweet connection to the town,” Gibson said about his time in Hays, the namesake of the seventh track on their 49 Winchester’s newest album, III.

He said while promoting the album questions about the origins of the track “Hays, Kansas” often comes up.

The slow swing beat with heavy electric and steel guitar backing reflect his lyrical portrait of a town where one could escape from the tribulations of life.

He said the inspiration for the song started with a road trip to California in January with his girlfriend at the time and her grandparents.

“Halfway there, the van breaks down in this little town called Hays, Kansas, and I’m like ‘What the hell is Hays, Kansas? Where are we at?’ ” Gibson said.

Waiting for parts, the group stayed in town for the night, but despite efforts to reconcile the fight continued into the next day.

“I had a train wreck of a night, a terrible night,” he said. “We just had a terrible, terrible time.”

The song, he said, does not reflect exactly what happened but rather served as the inspiration for the chorus.

And while the stop became a miserable experience, Gibson said he thought fondly of the town.

“Even though that place — when I think about it —– the first thing that enters my mind is huge distress and a pretty traumatic couple of days,” he said. “But, at the same time, it’s that perfect kind of place, tucked away out in the middle of nowhere. That is exactly the kind of place I would run to, fly to and go towards when I have days like that anyway.”

Even half the country away from home, he said the town that was  completely unknown to him, still had an essence of the familiar.

“The biggest part of it, I think, is that it reminded me of these little towns back home,” he said.

It was different than most of the metropolitan cities that made up the other stops on the trip.

“That little town — although I had a terrible night — it just sort of felt like home,” he said.

More about 49 Winchester, including songs from their latest album III, can be found on their website 49Winchester.com. The group is also active on facebook.