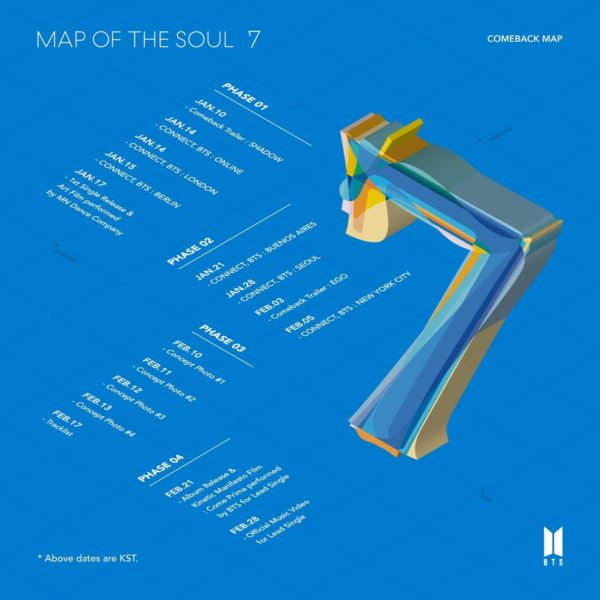 BTS is returning with their fourth Korean LP, MAP OF THE SOUL: 7. The septet just kicked off the album’s rollout by dropping a comeback trailer for “Interlude: Shadow”—along with a jam-packed release schedule. This will be their first album since last year’s MAP OF THE SOUL: PERSONA.

The hyper-prolific superstars took a 10-month break following the string of album releases that earned them three consecutive No. 1s on the Billboard 200, putting them on par with The Beatles. Last August, the seven members made international headlines when Big Hit announced that they’d go on vacation.

But it’s not like their release schedule has been completely dry. Since then, j-hope released “Chicken Noodle Soup” with Becky G, while Suga linked up with Halsey on “SUGA’s Interlude.”

As we wait for 7 to drop, Genius rounded up everything we know about the project ahead of its release.

Earlier this month, Big Hit Entertainment announced that the album will arrive on February 21.

When lead rapper Suga isn’t busy earning songwriting credits with Halsey, Epik High, and Heize, he also made time to star in his own comeback trailer for “Interlude: Shadow.”

The group’s first single will arrive on January 17, followed by the comeback trailer for “EGO” on February 3.

So far, we only have the credits for “Interlude: Shadow,” which Suga worked on with pdogg, EL CAPITXN, and GHSTLOOP.

The group is gearing up to release an art film performed by MN Dance Company, and the map is stocked with mysterious bullet points for “CONNECT: BTS” in London, Berlin, Buenos Aires, Seoul, and New York City.

In a press release for 7, Big Hit noted that “global fans are eager to discover how the story will continue on from the previous installment, which explored the message of finding joy in love and reaching out to the world.”

Map of the Soul’s first installment, Persona, played with the notion of Jungian archetypes, the idea that people have unconscious archetypal traits. Murray Stein’s book Jung’s Map of the Soul—the series’ namesake—even sold out on BTS’ online shop.

My shadow, I wrote and called it ‘hesitation’
It has never hesitated after becoming that
It keeps appearing under the stage or the light
Keeps glaring at me scorchingly like a heat wave (oh shit)

As Genius user milkmmxe pointed out, the “shadow” is a Jungian archetype that reflects the darker part of someone’s personality.

Suga builds on that idea in “Interlude: Shadow”:

Yeah, hmm, shadow at my feet
Look down, it’s gotten even bigger
I run but the shadow follows, as dark as the light’s intense