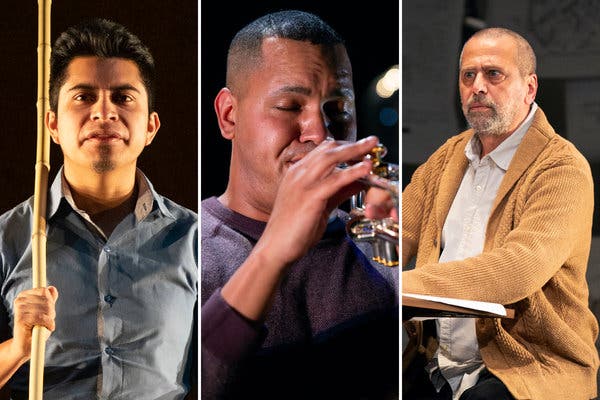 Running through Jan. 19, the Public Theater’s Under the Radar Festival shows off writers and performers new to New York as well as those hoping for a boost from this event’s international reputation. (That it coincides with the annual meeting of the Association of Performing Arts Professionals, described as “the world’s largest performing arts marketplace,” is no accident.) Here’s a report on productions from the festival’s opening weekend.

As both a speaker and a musician, Ahamefule J. Oluo specializes in mellow anxiety. It’s a smooth but layered style that makes him highly agreeable to listen to and at the same time unexpectedly moving. The concentrated emotional force lurking in his ease of manner sneaks up on you.

This oxymoronic approach is on optimal display in “Susan,” Oluo’s captivating reflection on the white American mother who raised him and the Nigerian father he never knew. Like his earlier “Now I’m Fine,” part of the festival four years ago, this latest offering was written by Oluo and his wife, the essayist Lindy West, and belongs to his signature genre: the standup jazz memoir.

That means he delivers personal anecdotes with stealth punch lines that are sandwiched among original compositions. Gleaming with stratospheric brass and propulsive melody, the numbers are performed by a crackerjack seven-piece band (including Oluo on trumpet) and two vocalists (okanomode and Tiffany Wilson).

Oluo deploys this format to follow the by-no-means parallel lines of his parentage. He was raised in poverty in the suburbs of Seattle by a single mother, the Susan of the title; his father, a Nigerian chieftain whom Susan met at college, left when Oluo, their second child, was a month old.

A virtuosic chapter of reminiscence finds Oluo traveling to Nigeria for the first time and visiting the tribal village of his father, now long dead. It is a scary and funny story; so, in a different vein, is Oluo’s self-flagellating account of his behavior during a fireworks explosion at a Fourth of July party back home.

But most of the show, which runs through Jan. 13, is a portrait of Susan, and her unorthodox but loving methods of bringing up Oluo and his older sister. Susan had once studied music, and a part of her had always longed to be a professional singer.

There’s a great account of Susan winning a $50 karaoke prize at a Black Angus Steak House when Oluo was a child. (The trophy went on to the mantelpiece.) Pay attention when he tells this story. It’s the setup for a whopping emotional payoff in the surprise final number, in which a son gives his mother a valentine that could only be delivered in showbiz. BEN BRANTLEY

When a retired man sets about building a moon rocket in his shed, he’s usually a crank or a joke. But Yusuf, the Palestinian hero of “Grey Rock,” is neither — or perhaps he’s both, plus something more: a gentle martyr of the imagination.

On the West Bank as presented in Amir Nizar Zuabi’s allegorical semi-comedy, which runs through Jan. 19, imagination is mightily constrained by politics. Yusuf (Khalifa Natour) must build his rocket in secret, lest Israeli forces shut him down. A TV repairman by trade, he has already served five years in prison for “writing a pamphlet.” His trip to the moon, if only he can make it, will show the world that there is more to his people than oppression and occupation.

Yet politics is secondary here. The Israeli presence is treated as an annoying fact of life and a source of what-can-you-do humor. (A supporter of Yusuf’s project says, “My only fear is that a second after you plant our flag on the moon, a van full of settlers will suddenly appear and plant their flag very very close.”) The focus is deliberately shifted from victimization to perseverance, as the ordinariness, and occasional extraordinariness, of daily life continues no matter the circumstance.

That’s no doubt why Zuabi, whose “Oh My Sweet Land” was seen in New York in 2017, tells his story almost as if it were a sitcom, complete with what seem like dead spots yawning to be commercial breaks. (Zuabi also directed the play, a production of the Remote Theater Project.) Certainly there are ludicrous complications: Yusuf’s daughter assumes that her widowed father’s new interest is a new woman; her fiancé thinks Yusuf is collaborating with the Israelis; the young man who delivers vegetables proves desperate to join the project. Even the local imam gets involved, looking to Islam’s great history of astronomy to justify offering the use of his mosque’s minaret as a launchpad.

But just when you think the play is overdosing on whimsy, it makes a dark turn that reveals its underlying melancholy. Yusuf’s life is no sitcom; living an unoccupied existence is a privilege Americans may take for granted but that he can only dream about. Same with the moon. To reach it would be more than an achievement for him. It would be an escape. JESSE GREEN

Celebration comes with a sting in “Andares,” an affecting exploration of the mythic past and fraught present of Indigenous peoples in Mexico, which runs through Jan. 19. A creation of the Makuyeika Colectivo Teatral, conceived and directed by Héctor Flores Komatsu, this four-performer production features exultant sequences of festal song and dance.

But there’s always an awareness of the shadows within the sunshine, a sense of cultures under siege from destructive modern forces. Even the ancient origin stories related here — creation tales of nature gods and the unsatisfactory humans they molded into being — are underscored with an implicit fatalism and an acknowledgment of the unfairness of life.

Komatsu, who has apprenticed with the fabled experimental director Peter Brook, here makes use of a similarly rich economy of theatrical means in “Andares,” which is performed in Spanish (and Mayan, Zapotec, Tzotzil and Wixarika) with supertitles. Two mats, a bowl, clay masks, a hat streaming with multicolor ribbons: such are the elements from which a series of scenes, fantastical and historical, are conjured.

Folk tales — of sacred trees and animals, and of the “grandfather fire” of all creation — are interwoven with first-person accounts by an ensemble of three actors (Josué Maychi, Domingo Mijangos and Lupe de la Cruz) and a guitarist (Raymundo Pavón Lozano). Some of these are centered on a native son’s ambivalence about the patriarchal, agrarian society he comes from. Others offer the detailed and intimate recollections of a muxe, a male-born member of the Zapotec cultures who identifies and dresses as female.

If the show’s concluding fable about the stalking of a sacred blue stag seems a bit metaphorically muddled, it offers a signal image that captures this vibrant show’s distinctive tone. The deer weeps, saddened by the destruction of the forests it once roved. “If you ever look into a stag’s eyes,” we are told, “you’ll see how they’re still full of tears because it still remembers. It’s still hurting. It has memory.” BEN BRANTLEY