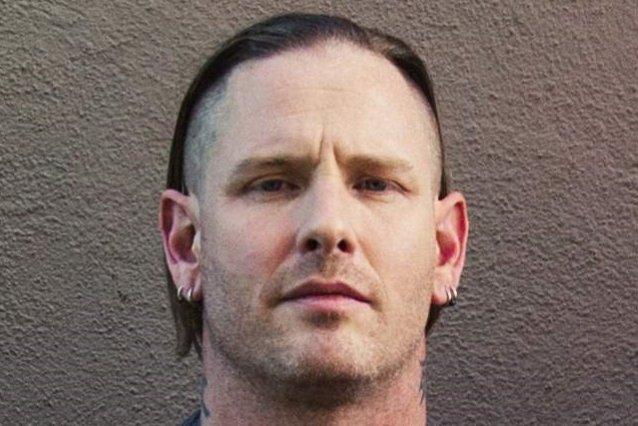 During a recent appearance on “Offstage With DWP”, SLIPKNOT and STONE SOUR frontman Corey Taylor spoke out against an age-old argument repeated by a lot of old-timers: kids today just aren’t interested in guitar-driven music and just want electronic beats.

“I know a ton of younger bands that play their own instruments, that play in-your-face rock,” Corey explained (see video below). “They’re rebelling against what the rebellion was against us. So they’re going back to basics in a lot of ways.

“Not to toot my son’s horn too much, but his band, they’re the real deal,” Taylor continued. “They were insane. I was at their first show, and there was no sampling, there was no nothing. They just came on and they just punched the shit out of the audience for 30 minutes. I was exhausted. They did it all on their own. And I think there’s a whole new generation of fans coming up that are gonna do that.”

Back in 2015, Taylor expressed his dismay over the artificial nature of modern pop music, comparing today’s hits to “listening to a fucking piece of wood.” He told Loudwire: “I feel like I’m being stung by 1,000 bees all at once. It’s so Auto-Tuned and it’s so beat-corrected and it’s so canned and processed and lifeless. You might as well be listening to a fucking piece of wood at that point. It bothers me because I put so much into everything I do. I put so much into my music, I bleed for it, I die for it every goddamn night. To watch these people basically let a computer go through the motions and do all the work for them, it’s insulting to everyone out there who has more talent and less attention.”

Taylor recently completed work on his debut solo album for a tentative September release. Corey recorded the effort with his solo band, consisting of Jason Christopher on bass, Dustin Schoenhofer on drums, with Zach Throne and STONE SOUR‘s Christian Martucci on guitar.