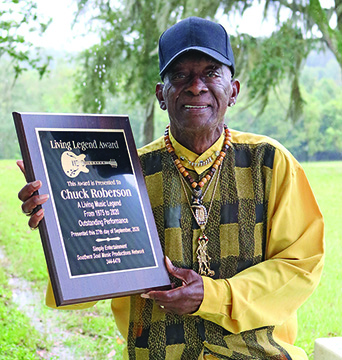 A homegrown soul singer who learned his skills in a competitive feat against his brother has remained at home for the last few months while COVID-19 has knocked out any chance of going back on the road. That doesn’t stop the love from flowing in, though.

With 45 years of experience with a guitar slung over his shoulder and a microphone in his hand, Roberson was pleased to accept the Living Legend Award on Sunday, Sept. 27, when the honor was officially bestowed upon him in a virtual ceremony. The award was presented by Simply Entertainment’s Southern Soul Music Productions Network for 45 years of outstanding performance in the music industry.

Born in Augusta, Ga. to Rosalee Alexander and Allen Roberson, Roberson ended up in Madison at just one year old and was raised in the North Florida county. The young musician later learned the guitar in a unique deal made by his mother.

Roberson had craved the presence of a guitar as a young boy, but so did his brother. Rosalee went up to the Western Auto store, picked up a guitar and told the Roberson boys that whoever learned to play it first would receive it. It was Roberson who beat his brother to the punch.

At the age of 14, Roberson found himself stacking dollar bills and packing to run away, citing racial tension in Madison County. “I was having such a hard time here in Madison,” he said. “I had some real bad complexes growing up I just wanted to get away from here and I did. At the age of 14, I left here.”

While he ran away, he wasn’t necessarily homeless. Roberson shared a home with a man named Pops, who he met at a bus station in Nevada while Pops was shining shoes. Pops – Roberson remains unaware of his real name to this day – offered the young Roberson a job and a place to stay while he received his education before he moved on to Los Angeles, Calif., where he began working with Charles Wright and the Watts 103rd Street Rhythm Band. “I was still young and they were reluctant to let me travel with them,” said Roberson, but they slipped him into the bars and clubs where persons under the age of 21 were not allowed. Roberson worked with the band for four years, beginning in the mid-60s, until they began traveling overseas.

It wasn’t until 1975 when Roberson was discovered at a local band competition in Valdosta by Jesse Boone, who was responsible for Soul Potion Label based in Albany, Ga. “‘The band was excited, they knew him,” said Roberson. “I’m saying ‘who is Mr. Boone?'”

A month and a half later, following a recording session, Boone put Roberson on the radio in Nashville with “Love Affair,” an original by Roberson, with “Are you woman enough?” on the B-track. Two months later, in 1976, Roberson recorded another single dubbed “She’s only a baby herself,” under Boone’s wing – a remake of a Smokey Robinson tune. Roberson didn’t quite gain national recognition until the release of “You’re going to miss me when I’m gone.”

Today, Roberson has 25 albums and calls Madison his home. Before the pandemic, Roberson would often play gigs. His most recent concert came at the Spring Fling Music Festival, in Mobile, Ala., in May of 2020.