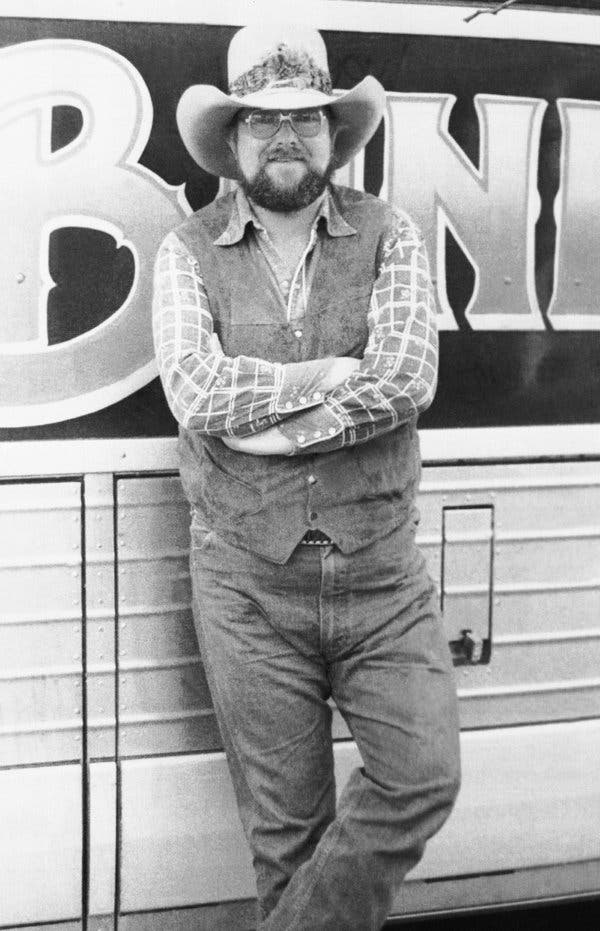 NASHVILLE — Charlie Daniels, the singer, songwriter and bandleader who was a force in both country and rock for decades, bringing a brash, down-home persona and blazing fiddle work to hits like “The Devil Went Down to Georgia,” died on Monday in Nashville. He was 83.

His publicist announced the death, at Summit Medical Center in the Hermitage section of the city, saying the cause was a hemorrhagic stroke.

Mr. Daniels made his first mark as a session musician in the late 1960s and early ’70s, playing guitar, bass, fiddle and banjo on Nashville recordings by Bob Dylan, Ringo Starr and Leonard Cohen. He also produced albums for the Youngbloods, including the group’s 1969 folk-rock touchstone, “Elephant Mountain.”

But his greatest acclaim came as the leader of the Charlie Daniels Band, a country-rock ensemble that hosted the Volunteer Jam, the freewheeling Southern music festival, established in 1974, that featured Roy Acuff, Stevie Ray Vaughn, James Brown and the Marshall Tucker Band.

Modeled after the Allman Brothers, another regular act at the Jam, Mr. Daniels’s band used dual lead guitarists and dual drummers in the service of an expansive improvisational sound that included elements of country, blues, bluegrass, rock and Western swing.

Formed in 1971, the Charlie Daniels Band earned a reputation early on for recording material of an outspoken countercultural bent, much of it written by Mr. Daniels.

“I ain’t askin’ nobody for nothin’/If I can’t get it on my own,” Mr. Daniels asserted in a gruff drawl on the chorus of “Long Haired Country Boy” (1975), which unabashedly extolled the virtues of free speech and marijuana. “If you don’t like the way I’m livin’/You just leave this long haired country boy alone.”

Other early hits included “The South’s Gonna Do It,” a pop Top 40 entry in which he sang the praises of his fellow Southern rockers Lynyrd Skynyrd and ZZ Top, among others; and “Uneasy Rider,” a talking bluegrass number that reached the pop Top 10 in 1973.

His plucky attitude reached new heights in “The Devil Went Down to Georgia,” a No. 1 country single and Top 10 pop hit from 1979 in which Mr. Daniels’s protagonist goes head-to-head with Satan in a fiddle contest, and prevails. The recording appeared on the multiplatinum-selling album “Million Mile Reflections” and won a Grammy Award for best country vocal.

His championing the underdog, coupled with his band’s constant touring, won Mr. Daniels a following, which included President Jimmy Carter, who invited the Charlie Daniels Band to perform at his 1977 inaugural ball.

But as the 1970s gave way to the ’80s, Mr. Daniels’s politics became increasingly right-wing and his songs more strident, beginning with “In America,” a Top 20 pop hit written in response to the Iran hostage crisis of 1980. “Simple Man,” a No. 2 country single in 1990, called for the lynching of drug dealers and sex offenders, while “(What the World Needs Is) A Few More Rednecks,” also from 1990, ran counter to the hippie nonconformity of his early hits.

“If I come across an issue, or something I feel strongly about, and I happen to think of a song that would go in that direction, then I do it,” Mr. Daniels said, discussing how he came to write “Simple Man,” in an online interview. “But that’s not what I start out, necessarily, to do.”

Such disavowals notwithstanding, Mr. Daniels proved to be anything but reluctant to share his increasingly right-wing views, especially on the Soap Box section of the Charles Daniels Band website, where he would pontificate on the Second Amendment, patriotism and other issues, and in his 1993 book, “Ain’t No Rag: Freedom, Family and the Flag.”

In 2003 he published “An Open Letter to the Hollywood Bunch” in defense of President George W. Bush’s Iraq policy.

“You people need to get out of Hollywood once in a while and get out into the real world,” he wrote. “You’d be surprised at the hostility you would find out here. Stop in at a truck stop and tell an overworked, long distance truck driver that you don’t think Saddam Hussein is doing anything wrong.”

Charles Edward Daniels was born on Oct. 28, 1936, in Wilmington, N.C. His mother, LaRue (Hammonds) Daniels, was a homemaker, and his father, William Carlton Daniels, was a lumberjack who played fiddle and guitar. Mr. Daniels followed suit, learning to play both instruments while in school before forming his own group, the Jaguars, in the late 1950s. He had begun writing songs by this point, including “It Hurts Me,” a collaboration with Joy Byers that was the B-side of Elvis Presley’s Top 40 hit “Kissin’ Cousins” in 1964.

Mr. Daniels disbanded the Jaguars and moved to Nashville in 1967 at the urging of the producer Bob Johnston, with whom he immediately established a successful career as a session musician. Among the albums on which he appeared were Mr. Dylan’s “Nashville Skyline” and Mr. Cohen’s “Songs of Love and Hate,” both produced by Mr. Johnston.

Mr. Daniels made his first record under his own name in 1970, a solo album, titled simply “Charlie Daniels,” for Capitol Records; it went nowhere. He and his band later signed with the Kama Sutra label, for which they recorded “Uneasy Rider” before finding a long-term home with Epic Records in 1975. Over the next two decades they recorded more than two dozen singles that hit the country chart, four of which, including “The Devil” and “In America,” crossed over to the pop Top 40.

In 1997, after a brief stint with Warner Bros. Nashville, Mr. Daniels founded Blue Hat Records, an independent label with an exclusive distribution arrangement with Walmart.

His numerous honors included the Pioneer Award by the Academy of Country Music in 1998 and the BMI Icon Award at the 53rd annual Country Music Awards in 2005. He joined the cast of the Grand Ole Opry in 2008, the same year he celebrated his 50th anniversary in the music business. In 2016, he was inducted into the Country Music Hall of Fame.

Survivors include his wife of more than 50 years, Hazel Juanita Alexander Daniels; their son, Charles William Daniels; and two grandchildren.

In 2014 Mr. Daniels paid tribute to his early days as a sideman with Mr. Dylan with a cover album of Mr. Dylan’s songs titled, “Off the Grid: Doin’ It Dylan.” Mr. Daniels remembered this period fondly, describing it as “loose, free and, most of all, fun” in a 2015 interview with The Tennessean.

Mr. Dylan recalled a similar affinity in his 2004 memoir, “Chronicles.” “I felt I had a lot in common with Charlie,” he wrote. “When Charlie was around, something good would usually come out of the sessions.”