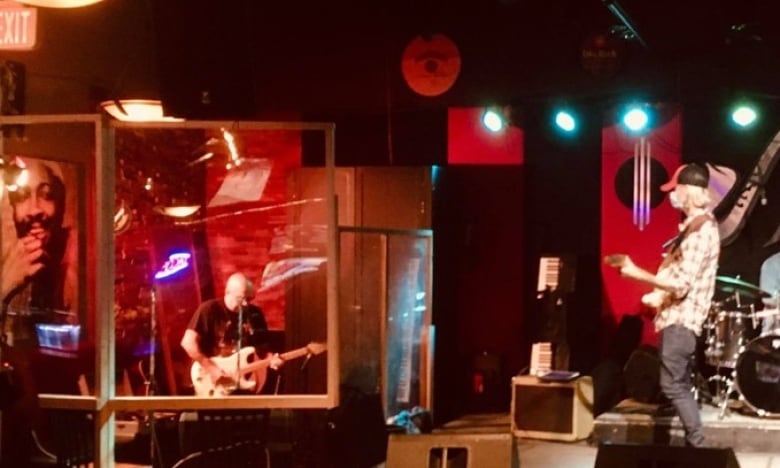 Calgary musicians are back on stages all over the city, doing their thing, and Calgary audiences can once again enjoy live music. It’s just a little different now at places like Broken City, The Ironwood, The Blues Can and Mikey’s on 12th.

That’s what happened at Broken City.

She said other venues created smaller plexiglass boxes — what she calls “musical aquariums” — but Broken City went in a different direction.

“We just kind of went the full meal deal and enclosed the whole stage,” Martin said.

Martin said the venue hopes that when things return to normal, the plexiglass walls can simply be removed.

Trevor Smith, general manager of Mikey’s on 12th, has set up plexiglass cubes for the performers.

“We followed the lead of the Ironwood and the Blues Can. They both have green rooms behind their stage, so they were able to knock out the wall, put a plexiglass panel in, and proceed in a way such that the patrons were being mitigated from from any sort of exposure,” Smith said.

This weekend for example, Calgary six-piece band Tom Phillips and the D.T.s will be live on stage to debut a new CD called Satellites and Stars.

It was recorded back in February as part of the Artist in Residence program at the National Music Centre. Phillips is debuting the new tunes throughout the weekend, starting Friday and Saturday at the Ironwood, and then again on Sunday at Mikey’s on 12th.

That could not have happened a few months ago.

Through the pandemic, both venues had been offering modified performances. Mikey’s opened May 29 with just instrumental acts. And Broken City went through the warm months offering jazz on the rooftop patio.

“Through the height of the pandemic, we were doing jazz on our rooftop and we weren’t doing live music in the venue,” Martin said, adding that the new arrangements are in compliance with AHS guidelines.

Both venues say they have been in constant contact with AHS inspectors throughout the process.

“Just to be clear, it’s not just for singers, it’s anything with wind,” she said. “So it could be like the sax player or a flutist or, you know, anything that blows, where there’s air coming out, they have to be sort of enclosed.”

Smith said the musicians are adjusting to this new arrangement as well.

“You get mixed reviews from them. Some like it, they see it as like being in a recording studio,” Smith said.

“When you place the musicians on stage, that is totally different. So if you have a singer or a saxophone player playing from these isolation booths, they’re a little removed from the band. But as with everything in this new normal, they’ve found a way to to deal with it, as have our sound techs and everything else.”

Martin said that part of the decision to enclose the entire stage at Broken City had to do with the musicians.

“It will still allow for more of that interaction and that dynamic, and we’ll keep that performance feel,” she said. “So that’s why we just kind of went hardcore and just wrapped up the whole thing.”

With the new indoor set-ups, patrons are asked to wear masks and social distance at their tables. They are encouraged to “chair dance” rather than head to a dance floor.

“Patrons have been pretty good about wearing masks when they have to be up out of their seats,” Smith said.

“We have no mics up on our stage other than just in the isolation booth. But it’s the new normal. At the end of the day, we want everybody to be safe.… So we want to take as many steps as we possibly can to fall in with these guidelines and try to keep performers, our team and the patrons safe.”

With files from the Calgary Eyeopener.