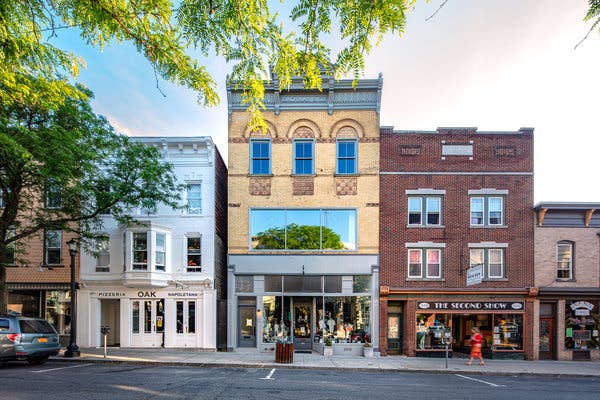 Ben Folds writes songs that twirl humor and misery together like flavors in a soft-serve cone. He never seems to take the easy way.

He named his 1990s alternative rock band Ben Folds Five, though it had just three members, a stroke of perversity questioned by every music journalist who interviewed him along the road to fame. And he put the piano, an instrument he plays with the intensity and grace of a Sumo wrestler, at the center of his trio, forcing him to drag a baby grand to gigs.

A solo artist since 2001, Mr. Folds, 53, also likes wrestling with real estate. After making vast improvements to an 8,700-square-foot three-story Victorian at 521 Warren Street in upstate Hudson, N.Y., that has been his home and creative refuge for the last four years, he put the rejuvenated building on the market this week for $2.8 million. Nicole Vidor is the listing broker.

Speaking from Sydney, Australia where he has been living since March, when the pandemic shut down his concert tour, Mr. Folds said he has a soft heart for big, needy properties.

“I get emotional,” he said. “I feel bad for the building.”

In 2014, he spearheaded the drive to save RCA Studio A in Nashville from demolition. The recording studio, which he leased as a work space for a decade and a half, was where country legends sealed their immortality. (Dolly Parton recorded “Jolene” there, to give one meager example.) It is now on the National Register of Historic Places.

Then, in 2015, his friend the musician and performance artist Amanda Palmer tipped him off to the 1890s brick building on the main drag in Hudson. Originally a department store that sold dresses with bustles, it had later lives as a karate studio, an antiques shop and a rock music club called Straybar, and later, Jason’s Upstairs Bar. Among its former residents were two members of the New Wave band Human Sexual Response, who opened a puppet theater there in the aughts and put on shows with titles like “The Joy of Cooking Children” (a latter-day Hansel and Gretel).

Mr. Folds and his wife, Emma Sandall, a dancer, paid $1,181,740 for the property, but soon discovered that it had been traumatized by the removal of a central staircase. Working with Peggy Anderson, who owns a local design-build firm, they invested hundreds of thousands of dollars into the structure. The hardwood floors no longer produce a single creak or groan. “You can’t roll marbles around anymore,” Mr. Folds said.

The couple also spent heavily on elegant finishes and fixtures. (Mr. Folds estimated the total renovation costs at close to $2 million.) The building became a live-work layer cake, where each layer measures about 3,000 square feet.

Much of its commercial base is leased to a boutique called Fluff that sells goods made from alpaca wool. A newly built steel front staircase with walnut treads rises from the private street entrance to the second floor, where the couple luxuriate in their vocations.

Ms. Sandall’s dance studio is at the north end. It has mirrors, a barre, four antique pendant lamps, a wall of windows overlooking Warren Street and a sliding-glass door that allows light to pour through it (when it is not shrouded by curtains). Should the room ever be repurposed, the floor can be easily pulled up to expose the underlying boards.

Mr. Folds’s music studio is at the south end. Given its walnut bookshelves, velvet couch and leather club chair, it could be mistaken for a library (with a Steinway grand piano and various other stringed instruments; and exquisite audio equipment; and stacks of vinyl). Indeed, Mr. Folds wrote his 2019 memoir, “A Dream About Lightning Bugs: A Life of Music and Cheap Lessons” here. “It was my dream to have an office that looks like Rex Harrison’s in “My Fair Lady,” he said.

Between the two studios is a large social or meeting space the couple call the project room and use in their collaborations with other artists. Its open kitchen includes custom steel cabinetry with walnut counters set against a wall of exposed brick. “I didn’t want it to sprawl and have a massive refrigerator to look at,” Mr. Folds said.

There is also an office that Ms. Sandall, who retired as a ballerina but remains immersed in the field, uses when she writes about dance for magazines, or organizes productions. Another room, with computers and digital printing equipment, is where Mr. Folds practices his photography side hustle (not a feeble one; his work has appeared in National Geographic).

The third level — a runway of naturally stained floorboards and glossy bead-board ceilings — is purely residential.

In the front is a living room with two antique pianos. Mr. Folds said he hoped to leave behind the 1890s Steinway Model C grand. “I love it,” he said. “I made a lot of records with it, but it’s the same era as the house, and it looks so good in that room.”

The open kitchen, like the one downstairs, is a linear affair, but with cabinets of white oak. An antique cabinet that he found was refinished and topped in marble and is used as an island.

Guests are given an elegantly simple bedroom and bathroom, while the couple rewarded themselves with a vast master suite, the kind where closets are more leap-in than walk-in and no one has to cede the bathroom mirror because there are two. Bathrooms, that is.

The master bedroom is, typically, both spare and lavish, with humble, rough brick and wide proportions. Looking out the window one sees Hudson’s Victorian rooftops and the green hills to the south. A pair of distressed doors that were original to the building and relocated from the ground floor can close off the suite.

The couple also designed a retreat at ground level. Behind Fluff, the alpaca store, is a double-height room to which they added a mezzanine and spiral staircase. The walls are accented with Cole and Sons’s Woodland paper, an intense floral with echoes of William Morris, and an eight-armed chandelier by Stephen McKay hangs from the ceiling. The original American chestnut staircase that connects this room to the upper private quarters has a railing that was pieced back together from fragments discovered in the basement.

“I seem to have a thing for long, rectangular, creative spaces, and we certainly put a lot into this one,” Mr. Folds said of the building. But now, he added, he is ready to scale back.

After he completes his interrupted tour, which will take him at least through 2021, he and Ms. Sandall will resettle in a much more compact house they own in the area. For the past three decades, he said, he has vacillated between “lording over these massive places and then receding back into small apartments and living a more modular style.”