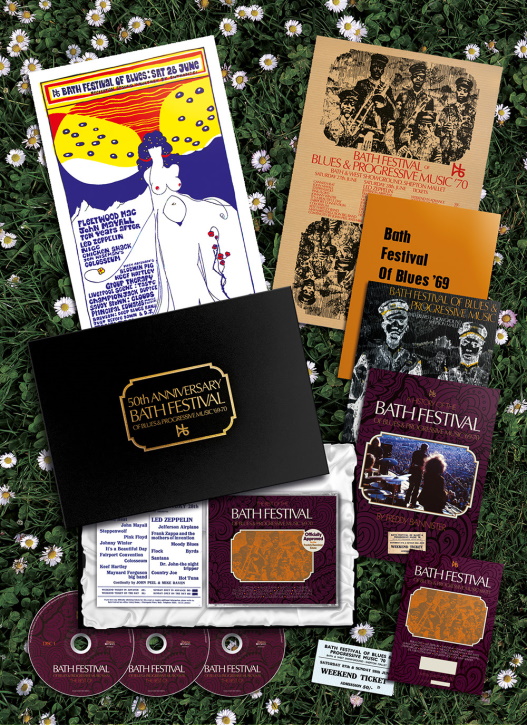 The Bath Festival of Blues and Progressive Music from 1969-1970 is being released as a 3-CD boxed set to commemorate the 50th anniversary of the counterculture era music festival. Following a smaller edition on June 28, 1969 within the city of Bath, U.K., featuring Peter Green’s Fleetwood Mac and Led Zeppelin, among others, the organizers held the second one at the Royal Bath and West Showground in Shepton Mallet, Somerset, England on June 27-29, 1970, where Pink Floyd, Santana, and others appeared, along with the returning Led Zeppelin.

It’s available to order here; see the track listing below.

The 1970 festival started at midday on Saturday, June 27 and finished at about 6:30 a.m. on Monday morning. A DJ played records for early arrivers from the Friday evening and continued to do so between many of the sets until the end. The festival featured a line-up of the top British and west coast American bands of the day, that also included Hot Tuna, Country Joe McDonald, Colosseum, the Byrds (acoustic set), Dr. John (acoustic set), Frank Zappa & the Mothers of Invention, Canned Heat, It’s a Beautiful Day, Steppenwolf, Johnny Winter, John Mayall with Peter Green, Fairport Convention, Keef Hartley, and others.

Watch some silent from the festival of a Robert Plant lookalike

Though the line-up approached the level of the more famous Isle of Wight Festival held in August of the same year, it attracted less press coverage at the time and has generally received less attention in the years since.

Both editions of the Bath Festival were the brainchild of promoter Freddy Bannister and his wife Wendy. The 1970 show attracted a significantly larger crowd, estimated at 150,000, than the 1969 debut, which created some serious on-ground difficulties. The logistics proved to be too vast for the Bannisters’ small team to adequately cope with, and the security staff stole large amounts of gate receipts, resulting in a far smaller profit than expected.

Watch some more (silent) footage from the 1970 festival

Getting to the festival became a problem for many fans. The country roads were blocked by cars, and many of the bands’ equipment trucks could not get to the site. On Sunday morning, Donovan walked onto the empty stage to address the bored crowd who were drying out from the overnight rain.

The audience wasn’t there to see a folk singer, and he engaged in a bit of small talk, stalling for time. When he reportedly played “There Was an Old Lady Who Swallowed a Fly,” it apparently raised the crowd’s enthusiasm and he continued with some of his classics like “Mellow Yellow’ and “Sunshine Superman.” Donovan’s impromptu performance and stall tactics eventually helped to fill several hours.

Related: We talked with Donovan about many of his hits

The festival was seriously behind schedule and many of the bands ultimately performed to smaller crowds in the early hours of Monday morning. Not unlike Jimi Hendrix at Woodstock a year earlier, the last act, Dr. John, hit the stage at dawn.