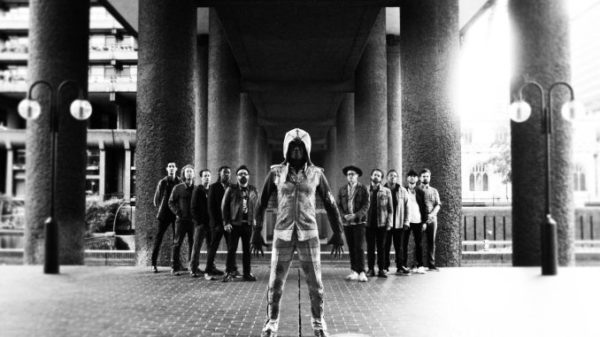 Antibalas will perform at Washington’s in Fort Collins on February 28th.

Listen while you read (KEXP Seattle/YouTube):

Martin Perna conceived of the band in 1997 while visiting family in Mexico. He said there were exceptional amounts of kidnapping at the time, and the word Antibalas — meaning ‘bulletproof’ or ‘anti-bullets’— kept coming to mind.

When he went back to NYC, he asked some of his bandmates from Sharon Jones & the Dap-Kings to play and perform some of the songs he wrote. They started adding musicians he knew from the neighborhood, including Amayo, who was running a kung fu dojo and fashion gallery a few blocks from where he was living.

Martin loves the mountains, the fresh air, the scenery — the Colorado vibe. That’s why he says he is looking forward to his stop in Fort Collins in February.

“Depending on the altitude, it can always be a little challenging, but we have the advantage of traveling there by land and having time to acclimate, which will help us be in top shape for the show,” said Martin.

Martin said Washington’s is one of the group’s favorite venues. “Believe it or not, most venues aren’t designed at all with the performers in mind…we came here about 18 months ago and had an amazing show with Flobots. It was a lot of fun, and we met a lot of great people who love music and are committed to positive social change. When we have shows like this, it recharges our batteries and keeps us going,” said Martin.

“As we perform, we hope to show people there is another way of being, of navigating the world. As a group, we are all individuals but come together as a team to form something much greater than the sum of our parts. Everyone needs to be a contributing member of multiple communities that are working to heal and sustain the world,” said Martin.

He says Antibalas’ music has inspired other musicians around the world to create and play Afrobeat music. He says the group believes their music can nourish the mind, the soul, and the body.

“It is big-band soul and protest dance music. The main roots, especially on this latest record, come from Nigeria, West Africa, and are rooted in the modern fusions of highlife and Western jazz formulated in the late 1960s by Orlando Julius, Fela Kuti, and Geraldo Pino, among others. Fela is largely credited for naming this style afro-beat,” said Martin.

Antibalas would like to inspire people around the world to organize while focusing on battles they can finish and win. Also, to practice deep unconditional love while being aware of one’s power, presence, and impact on the planet.

“Two things inspire me to write: it either starts from a percussive rhythm, usually two rhythms which interlock, then I think of a bass line. OR, a melody will come to mind. I’ll work with it, play with it to see if it should be longer, or shorter, where it can go, and what needs to be underneath to support it. Performance-wise, it’s a different approach: we’re playing music we’ve already composed, but with some improvisational sections like you’d find in a conventional jazz show. Live, we try to establish a deep connection with the audience so we can get a feedback loop of energy going that propels the show,” said Martin.

Most recently, Atabalas released their seventh record, Fu-Chronicles (Daptone Records). It features songs written and composed by vocalist, Amayo while narrating his journey from Nigeria to Brooklyn. The music attempts to represent Amayo’s experiences as a Jow Ga Kung Fu Master along with songs he wrote for the Fu-Arkistra.

Antibalas’ albums so far have been mostly group contributions with different members composing or co-composing and bringing songs to the group: each record has varying degrees of the members’ musical DNA on it. Fu-Chronicles comprises a big chunk of material that Amayo composed that was so beautiful but also very idiosyncratic. It needed to be on an album. It was time to record it.

The stars lined up. They finished it after a lot of hard work and setbacks. “I spent weeks listening to live tapes and demos to codify the final arrangements and make them fit onto an album, which was challenging as the songs were 15-20 minutes long in their original forms. Editing and mixing were a lot of work because the music is so dense and multilayered,” said Martin.

The February 28th show at Washington’s will to be full of dance. The crowd will be radiant and positive.

“Thanks for making the trip to see us! You will get your money’s worth and more,” said Martin.