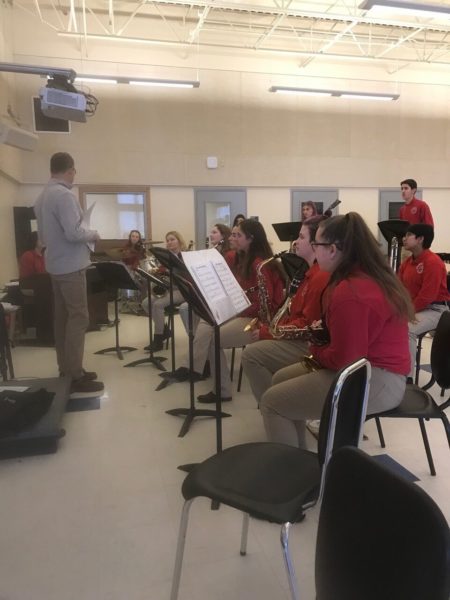 South Portland High School will be hosting the All State Jazz festival this year in March. Craig Skeffington, band director, said that the students have been rehearsing for months. Courtesy photo Craig Skeffington

SOUTH PORTLAND — Students in South Portland High School’s jazz programs are preparing for the All State Jazz Festival on March 13-14, where their performances will be judged and graded based on high standards.

Craig Skeffington, SPHS band director, said that between 40 and 50 schools will be represented at the festival, which also serves as one of the program’s biggest fundraisers.

The festival is a part of the Maine Music Educations Association, said Skeffington, an umbrella group that oversees music programs throughout the state.

“[The schools] come to South Portland, and they’re adjudicated by judges,” he said. “The goal of the performance is to meet the gold standard. Anything below a 95 is a silver — 85-89 is a bronze. The goal is to get gold. Not many bands do. Of the 40 bands coming, maybe 5 or so receive gold.”

While the event isn’t meant to be competitive between the schools, Skeffington said that the students will be competing within themselves to achieve a gold standard.

The bands will also be required to sight-read a piece, meaning that the students will play a piece of music that they’ve never seen before, explained Skeffington.

He said schools will travel to South Portland from locations as far away as Millinocket, which is about a three-hour drive.

“Luckily, we’re hosting so we don’t have to worry about traveling,” said Skeffington.

This is the second year in a row that South Portland High School will host the All State Jazz Festival, said Skeffington. The South Portland Music Boosters will sell T-shirts and tickets at the door: $5 for students and $7 for adults.

Besides the festival, students involved in band programs are busy this time of year with activities like the Color Guard competitions that will also take place in March, a District 1 Honors Festival in February, and a band trip to Disney World during February vacation, said Julie Rothrock, chair of publicity for the South Portland Music Boosters.

“We have a featured performance, which is Downtown Disney,” said Skeffington. “Wednesday morning on the 19th. We’ll also hit a couple parks and have fun.”

With all of these events, Music Boosters support the band and chorus programs and keep parents involved, said Skeffington.

He added that the middle school music teachers Jean Quinn and Sandra Barry are the reason that students in the South Portland School District get excited about band and music, staying with the program throughout high school and possibly beyond.

“Our message to them is that this is a lifelong pursuit,” said Skeffington. “If you play football in high school, you can’t really play after high school. If you pick up a trumpet, you can play for your entire life. Some kids I’ve taught now are band teachers.”

He said the school’s administrators are all involved in band as well, which makes it easier for them to know where Skeffington is coming from when he is asking for something from the district.

“I like the kids, their parents,” he said. “It’s a very friendly group.”

RSU 21overall assessment scores up in most categories